Loonie and I were planning a 2-week adventure in Rocky Mountains National Park for early September when we learned that another grandchild is due then.  So, that trip has been tabled for now and we’re looking at heading back to the Smokies in October.  I can’t make the backcountry site reservations until 30 days out from setting off so we’ll see how that plays out.  We want to get to a couple of areas we haven’t visited before, specifically Hazel and Noland Creeks and a portion of the Lake Shore Trail.  Loonie wants to stay at the Fontana “Hilton” shelter, so we would likely end the Hazel Creek-Lake Shore Trail hike there.  I can’t say that I blame her.  The “Hilton” is perched on a beautiful spot overlooking the lake.  Deep Woods and I checked it out when we passed though on our way to the dam and into the park back in 2015.   We both wish now that we had taken the time to stay. 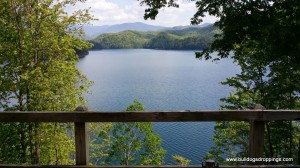 Now for the concessions.  Over the course of the last year or so the Essential Tremor has progressed to the point where I can no longer safely cook or boil water using canister-top stoves or traditional side-handled pots, even using two hands.  I had to look at safer options if I wasn’t going to resort to cold-soak meals and no coffee or hot tea.  I’m not that desperate!  Not yet anyway.  After trying a variety of stoves, mugs and pots, I settled on a Kovea Spider remote canister stove and GSI Halulite 1L aluminum kettle.

First, the Spider.  Assembly is a snap.  Swing two of the three pot supports out until they pop into place, screw on the canister (surprisingly, something I can still manage) and you’re good to go.  Assembled height is only 3-5/8″ and the pot supports are wide, making for a very low, stable setup when combined with the kettle.  Since the regulator is moved out from under and away from the burner, I don’t have to be quite so concerned about knocking the kettle off and scalding myself when adjusting the flame.  The Spider adjusts evenly from a mere flicker to a virtual blow torch!  It is heavy.  However, at 6.1 oz (less stuff sack and igniter), it’s one of the lighter remote canister stoves on the market.  As an added bonus, it will be an ideal stove for when Loonie and I go together.  Concession #1. 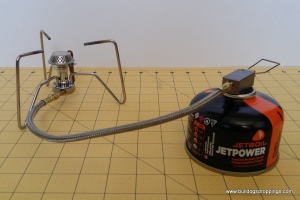 To get the most efficient use of fuel from the Spider, I needed a windscreen.  I already had one made from aluminum flashing that I’ll use for the time being.  That weighs 1.46 oz but it will likely be replaced with a simple one cut from an aluminum baking pan.  Nothing fancy.   Concession #2.

With the nature of my tremors, its much easier and safer to lift and pour from a kettle than mugs or pots.  The 1L GSI Halulite model has a good diameter to height ratio…wide enough to be very stable yet deep enough to store a small fuel canister.  It has a large locking bail, lid that’s easily removed and replaced with the bail in the upright position and a large opening, making it easy to pack fuel canister, stove, etc.  The opening is also large enough that you could cook and eat directly from the kettle, assuming you have a surface to rest it on.  It also features deep stamped graduation marks…more so than you typically see on camp cookware.  You can easily tell how much water you’ve got in it.   Downside: 7.0 oz.  Concession #3.

My experience with the hand-held piezo igniter that came with the Spider was hit or miss.  I struggled to consistently light the stove using it.  A Bic lighter or windproof match would suffice but considering my dexterity issues, I wanted something easy to manipulate and kept my hands as far from the burner as possible.  The Soto Pocket Torch XT looked like a suitable alternative.  At first glance, the Pocket Torch XT appears similar to a typical butane lighter, just larger.  However, the burner head can be pulled out 2-1/2 inches, at which point it resembles something akin to a small bbq lighter.  It ignites easily and when you’re done, slide the burner head back into the body.  It can be refilled using a standard can of butane or a typical iso-butane canister (using an adapter available from Soto).  The downside of course is that, at 1.79 oz, it weighs as much as four mini-Bics!!!  Concession #4. 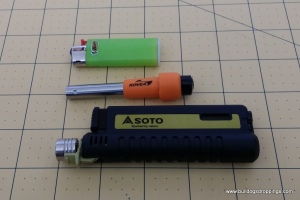 Then it struck me that I was left with nothing to drink my morning cup of coffee or nightly cup of hot tea from!  We already had a 750ml Toaks Ti pot with folding handles.  As long as I only put 8 oz in it and I use both hands to lift it, that will suffice for now.  I leave the handles folded in and use the included mesh stuff sack like a “cozy” to keep the contents a bit warmer and to keep from burning my hands.  Add in a Snow Peak silicone “Hotlips” and the total weight comes to 4.22 oz.  A handle-less model is available from Toaks.  Shaves off about 1 oz.  Something to consider down the road.  Safer yet would be to just break down and bring a dang sippy cup!  Concession #5.

One thing remained though.  Years ago I started off using a recycled plastic yogurt spoon to eat with.  Weighs just 0.24 oz. but its too short and I ditched that in favor of a long-handled Optimus spoon.  0.64 oz.  That worked fine for awhile.  Now the tremors are severe enough that its no longer practical.  The bowl of the spoon is too small and not deep enough.  I’m lucky to hit my mouth with a spoon, much less have any food left in the bowl once it gets there!  As of late I’ve been using a table spoon at home and have found that easier to use.  A deep-bowled soup spoon would be next next logical step.  So, I thought “Why not find something similar…just lighter?”

Gossamer Gear has a nice long-handled Bamboo spoon that’s $5 and weighs just 0.5 oz.  Awesome!  I considered one of those but decided I would look around a bit more.  After digging around online I found some Bamboo soup spoons on Amazon.  Overall length is 8 inches and the bowl is 1-3/4 inches wide.  I do wish the bowl was a little deeper but I’ll go with this for now.  Only weighs 0.43 oz so its a win-win!  A ten piece set was less than $12, meaning I’ll have plenty to use at home as well.

So, what’s the damage?

That’s right.  21 oz.  Crazy to think that its come to this.  I’ve gone from using a recycled Heineken beer can/Esbit setup that weighs just a few ounces to more than a pound of stuff!  In the end though, its a much safer, functional setup for me and that’s what counts.  Spilling a pot of boiling water all over myself while out in the field would be very, very BAD!!!  Why not use Esbit or Alcohol with the kettle?  Either one would save a bit of weight over the Spider.  I’ll let you go back and read my last post explaining why I don’t see either of those as a practical, safe option going forward.

A big shout out to Dan at www.woodgaz-stove.com!  His counsel and generosity should make my travels much safer.  That wraps up the “kitchen”.  Some things to consider if you struggle with Essential Tremor.  In the next post, I’ll cover other concessions and adaptations I’m looking at for the rest of my kit.