After breaking camp and taking another look from the cliff, we began the day’s hike.  It was 2.3 miles of nearly all downhill to the footbridge over I-70 and we knocked that out quickly.  Watching the cars fly by I couldn’t help but think that I was glad I wasn’t in one of them and that all too soon I would be rushing my way to and from work just like them.  And while I was grateful to have a job that provided me the opportunity to be doing what I was doing at that moment, I wasn’t looking forward to going back.  As each hike drew to a close it became more difficult to not keep right on going.  I always wondered as I stepped off the trail to head back home if this would be the last time.  Would I ever have this opportunity again?  I suppose that meant that each time I could return was that much more precious and shouldn’t be taken for granted.

After crossing the interstate, we passed through a residential area and the Bartman Hill Trail which leads down to Greenbrier State Park, where we had car camped for two nights the week prior.  A couple more miles of easy trail brought us to Washington Monument State Park, home to the first monument erected in honor of George Washington.  We dropped the packs and took a long break for lunch and some pics.  The view from the base of the monument is fantastic but from the top its even better and we didn’t pass on the opportunity to climb up and get a look.  On the walk down the hill from the monument to the parking lot and restrooms there are signs denoting many of the milestone dates throughout Washington’s life and career. 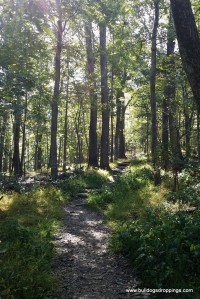 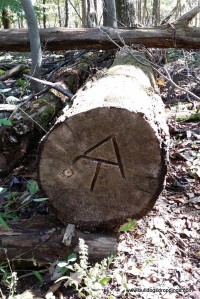 Once at the bottom, we topped off on just enough water from the spigot to get us to Dahlgren Backpack Campground where we would stay for the night.  Leaving the park, we had a short climb followed by an equally short descent to US 40 at Turners Gap.  A beautiful chapel built by Madeline Dahlgren in honor of her husband John, an admiral in the US navy during the Civil War, stands here.  What’s cool is he was the inventor of the Dahlgren Gun, the cannons that were used on the USS Monitor.  This was the first ship with a revolving gun turret, and it took part in the first ever battle between two iron-clad ships.

Directly across the road is South Mountain Inn, an upscale restaurant.  We walked our dirty, smelly selves over, Loonie intent on getting a meal that didn’t involve merely adding boiling water.  Closed.  Dahlgren Backpack Campground was just 0.3-mile ahead and there were showers there so we chose to hike on, setup camp and get cleaned up.  With those out of the way, we enjoyed another fine dinner of freeze dried whatever and a meager fire while talking to a mother and daughter out together on an overnight hike. 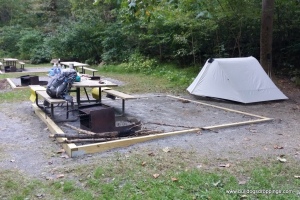 This was to be our longest day of the trip, so we made a point of getting started early.  Water would be scarce or non-existent between here and the spigot at Gathland State Park, so the decision was made to hike there, fill up on water and then move on to Ed Garvey Shelter, the last one before Harpers Ferry.  We could have stopped short at Crampton Gap Shelter but since the water source there was dry and it was nearly a half mile short of Gathland, it only made sense to hike on to Ed Garvey.  The water source at Ed Garvey was dry as well, so we would have to carry enough water from Gathland to see us into Harpers Ferry the next day.  Ughhh…

At just under a mile on in the day we came to Reno Monument Road at Fox Gap.  A Civil War battle had taken place here and we looked over the informational placards.  A 0.25-mile side trail led to an impressive monument to the North Carolina men who lost their lives here.  I was glad we got to see it but that meant that I had Loonie walk an additional 0.5 mile that didn’t put her any closer to our destination. 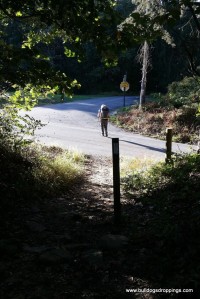 We got moving again, reaching the side trail to the Rocky Run Shelters in one mile.  I usually make it a point to take the side trails to shelters just to have a look, assuming they’re not located too far off trail.  Rocky Run is only 0.2-mile off the AT so under normal circumstances I would have made the trip down.  This time, however, I told Loonie that since we had a good climb ahead of us up to Lambs Knoll we should keep moving.  Unfortunately, we took the side trail to the shelters rather than staying on the AT.  Another half mile added to her already long day.  FWIW, there are two shelters here, the newer of which looks to be really nice.  We didn’t take the time to get a good look though since we needed to keep moving.

Back on track, we started making our way up to Lambs Knoll.  Once there, we dropped the packs, had some lunch and spent some time taking in the view and talking with a southbound thru-hiker, FitBit.  Moving on, Loonie turned on the gas, leading us quickly down past Crampton Gap Shelter and on to Gathland State Park.  Once again, the packs came off and we took some time to use the restrooms, fill up on water and snap some pics of the War Correspondents Memorial.  Very cool!  As much as I wanted to take the time to check out the museum, it would have to wait for a return trip.  Still several miles to go and I wanted to get Loonie off her feet. 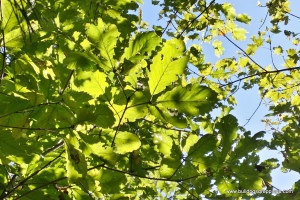 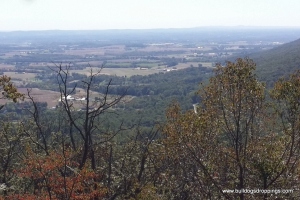 Despite the easy grade for the remaining 3.8 miles, it was apparent right away that Loonie was running out of gas.  She pushed on though and we made it to the shelter with plenty of daylight left.  At nearly 12 miles, counting the side trips, it was Loonie’s longest day ever…and she did AWESOME!  Ed Garvey is another large, nice shelter but we had the misfortune of arriving on a beautiful Friday afternoon.  With its proximity to Harpers Ferry, this shelter gets a LOT of use and today was no exception.  The shelter itself was crammed full with a youth group and nearly every available spot to pitch a tent was taken.  We found a decent place to pitch, albeit a bit too close to another couple’s tent for the liking of either of us.  They were accommodating though and neither of us disturbed the other.  FitBit showed up a bit later and invited us to join her and a couple of section hikers around their fire.  We took her up on it and had a good time before calling it a day.

With the call of showers and town food coming from just six downhill miles away, we packed things up and got moving quickly.  We soon passed what I assume was a fraternity group heading to Ed Garvey for the night.  They were actually towing two full size coolers…most likely containing their alcohol provisions…up from Harpers Ferry.  Crazy!  I suppose we escaped just in time.  At just a mile or so in, we began the long descent to the C&O Canal Towpath.  About mid-way into the descent we came to Weverton Cliffs which offer amazing views down onto the Potomac River.  Again, being a Saturday and nice out, the cliffs were covered with day hikers.  We waited patiently, eating an early lunch, while waiting for them to move on so we could get closer to the edge for a better view.  We had it all to ourselves for just a few minutes before another wave came along.  Satisfied with the little time we had and wanting to extricate ourselves from the madness, we moved on.

Bulldog and Loonie on Weverton Cliffs

Downhill for 1.3 miles more brought us to the US 340 underpass, some railroad tracks and the intersection with the towpath, which the AT follows for 2.5 miles to the bridge over the Potomac and back into Harpers Ferry.  This was a walk in the park compared to the rocky trail we had encountered over the last several days but while we tried to stay to the extreme right, it felt as though at any minute we would be plowed over by one of the many cyclists whizzing by.  Sensory overload was really kicking in, especially when we arrived at the bridge.  Gazillions of tourists crowded the towpath and bridge, maybe so they could say they had hiked the AT (kinda like me with my 0.1-mile walk in PA)! 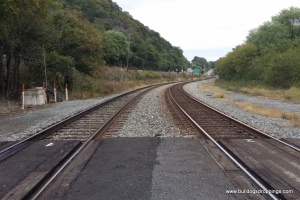 We made our way up to and over the bridge and into Harpers Ferry, completing the approx 42 mile Maryland section.  West Virginia wouldn’t be complete until we made the one mile hike from lower town up to the Quality Inn but that would have to wait a bit.  More pressing matters were at hand.  We parked our smelly selves at a table on the patio of a bar and grille and had cheese burgers, fries and massive quantities of cold Coke.  That was followed by massive quantities of chocolate chip cookie dough ice cream from down the street.

The hordes of tourists and dwindling daylight finally convinced us that we should move on.  We had spent better than a day visiting Harpers Ferry the week prior so other than taking a few quick pics of the cathedral and Jefferson Rock, we proceeded on to the hotel.  And just like that, we were officially done with West Virginia as well.  What an awesome, albeit rocky, hike!

One other item of note:  we had stopped off at the Appalachian Trail Conservancy (ATC) HQ in Harpers Ferry during our visit the previous week.  Its tradition that once a hiker reaches this point on the AT, they have their pic taken and placed in a binder along with all of the other hikers’ pics for that year.  Seeing as how I was a bit less than 700 north-bound miles along and the side trail to the ATC is at mile mark 1024.9, I didn’t feel quite right about having mine taken and added to this year’s book.  I felt as though I hadn’t earned it yet.  That may sound absolutely ridiculous but that’s just how I felt.  Loonie and I snapped one another’s pics while visiting that day but should I be fortunate to complete those miles I have left south of that point you can bet that I’ll get that official pic taken and added to the book.