Picking up where I left off…

With the objective to complete all of Maryland over the course of the next several days, we had our shuttle driver drop us off at the trailhead on Pen Mar Road in PA, essentially 0.1-mile north of Maryland.  If you begin your south-bound hike at Pen Mar County Park, you’ll have to head north a short distance to cross the Mason-Dixon Line and then double back.  We’re talking less than one tenth of a mile each way so it’s not that big a deal but I figured it would be easier to just start from Pen Mar Road so I could say that I had hiked some of PA!  One tenth of a mile still counts, right?  We quickly made our way to the state line sign, took some celebratory pics and hiked on.

Almost immediately, we crossed some railroad tracks and a short distance later entered Pen Mar County Park.  Several south-bound thru hikers were hanging out there and we talked to a couple of them for a bit.  There’s a great view of the valley from a bandstand in the park so we took some more pics from there.  Once again, we would face some logistical issues because of dried up water sources so we filled up on enough water to get us from here to Little Antietam Creek the next morning.  We had passed the creek on the shuttle to Pen Mar Road and knew that it was flowing well but stopping at Raven Rock Shelter for the night would put us short of this critical water source.  Next, we made use of the restrooms, the last real ones we would see over the course of the next few days and moved on again. 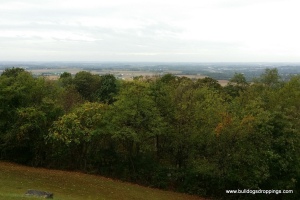 From there, the tread was easy going for a bit but as soon as the ascent to High Rocks began it became a boulder-fest.  For a short distance there was no real trail to be seen…just boulders.  The white blazes on the trees led us up the rocky incline.  Otherwise we wouldn’t have known a trail even existed here.  At one point, Loonie took a scary spill but fortunately she suffered no more than a scraped-up arm.

We finally made our way to the top and parked our butts for some lunch.  High Rocks is a launch point for hang gliders, complete with a large concrete platform to take off from.  Unfortunately, some folks felt the need to cover everything in graffiti.  The view from the platform is spectacular.  The platform itself and the rocks surrounding it…not so much.  It was beginning to look as though it would start pouring any moment so with lunch and some mandatory pics out of the way, we continued on.  Fortunately, the real rain wouldn’t come until that evening. 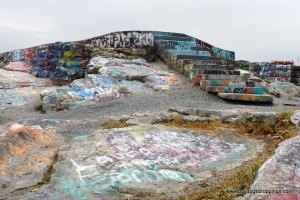 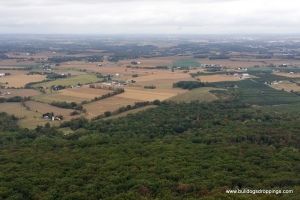 The rocks finally gave way to a bit softer tread and we covered the final 1.8 miles to the shelter in short order.  Raven Rock is a large, newer shelter with a covered eating area.  There are cables to hang your food and some very nice places to tent nearby.  We chose the shelter in order to stay out of the impending deluge .  We had been fortunate up to this point and, while a light sprinkle fell on and off throughout the day, had stayed dry under the cover of the trees.  Two north-bound section hikers were already there and two of the south-bound thru hikers we talked with earlier showed up shortly thereafter.  We all talked, fixed and ate dinner, watched a large rat snake slither by and then settled in for some shuteye.  Just after dark and as the rain started to come down, another couple of south-bound thru’s pulled in.  They had just enough time to eat, fix up their spots in the shelter and settle in before the downpour began.  And it didn’t stop until morning.  One of the few nights I was grateful to actually stay in a shelter.

Another very short day was in store so there was no big rush to get moving.  The rain had stopped, and it appeared from the forecast that we would be spared of any of consequence throughout the day.  I was glad we carried water up from Pen Mar the day before because the water source at Raven Rock Shelter is supposed to be nearly a half mile away.  It was just one mile south to Little Antietam Creek, so we were good to go.

Just 0.2 mile before the creek, we passed some neat rock formations and came to Raven Rock Cliff, which offers good views to the east.  After a quick break there, we moved on, crossing Raven Rock Road (MD 491).  Little Antietam Creek parallels the road at this point.  Normally you’re supposed to be able to rock hop across, but our shuttle driver warned us that after heavy rains the crossing can be treacherous.  Well, we had gotten a lot of rain the night before but fortunately found a rock hop was still quite doable.  Otherwise, a two-mile road walk would have been required to avoid a wet crossing.  We dropped the packs here and filled up on water to get us through until the next morning since the water source at Ensign Cowall was reported to be dry.  Carrying all of the extra water weight sucked but it sure beat running out altogether. 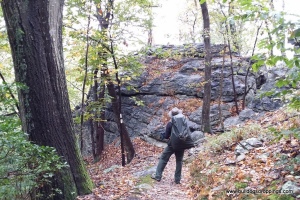 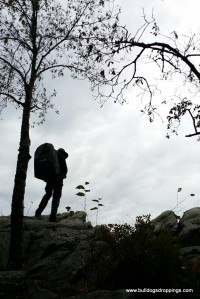 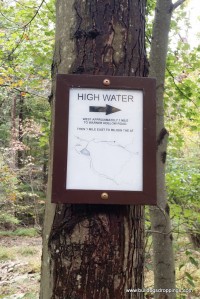 Resuming our walk, we had a 0.8-mile stretch of nice trail to Warner Gap Hollow.  Here too the water was flowing.  We then crossed a power line cut, passed more rock formations and broke free from the forest for a bit for a short walk through a pasture.  One more power line cut crossing and we were at Ensign Cowall Shelter.  We were the first to arrive and the only others to come in for the night were south-bounder Lil Buddha and a young section hiker by the name of Nick, both great guys.  Ensign Cowall is another large shelter with a covered eating area.  There are some dispersed tent sites, one of which was occupied by a lone tent that looked as though it had been there awhile.  We never saw anyone come or go.  Kinda creepy!  Rain was predicted again for the night, and since it was just the four of us, Loonie and I opted to do the shelter thing once again.  Like Raven Rock (and the rest of the campsites and shelters in Maryland), there is a privy but here, there is a pole rather than cables to hang your food.  Nick and Loonie got a small fire going for us and we spent some time talking before calling it a day.  Once again, it rained through the night, though not as bad as the night before.

Lil Buddha was up and on the trail not long after we had crawled out from under the quilt.  Apparently that guy flies!  Nick and the two of us talked over breakfast before he packed up and hit the trail himself.   He did inform us that he had walked this same stretch the week before and was sure the spring at Pogo Memorial Campsite was flowing.  While we were going to pass on Pogo and move on to camp at Annapolis Rocks, he wasn’t sure if the source at the latter was flowing.  With water at Pogo, we could fill up there to see us through until Washington Monument State Park the next day.  That would mean carrying a TON of water for a good stretch but, again, better than the alternative.

Once back on the trail, we quickly came to and crossed Wolfsville Road (MD 17).  A couple of stretches of the trail between Ensign Cowall and Annapolis Rocks were nice and smooth but the rest?  LOTS of cobble-like, chunky rock.  Hard on the feet rock.  Long stretches where your attention is strictly devoted to not taking a spill rather than enjoying the forest.  Other than a short climb right out of the gate and another 1-1/2 miles before our destination for the day, the grade was very easy.  The rock was a pain though.

We finally reached Pogo just after two in the afternoon.  I made the short walk down the Thurston Griggs Trail to the spring and filtered water.  Once back on the AT, we made the short climb up to Black Rock Cliffs, the perfect spot for a late lunch.  The views to the west were great.  Since we only had one more mile to knock off for the day, we spent quite a bit of time here resting our rock-battered feet and enjoying the sunny day.

The tread smoothed out some between Black Rock Cliffs to Annapolis.  Nice way to wrap up the day’s hike.  Annapolis Rocks Campsite is a nice setup.  Apparently, a caretaker with the PATC often stays here to watch over the site and keep things maintained.  Since the area around the cliffs has seen so much use over the years, sections have been cordoned off to allow for re-growth.  Many individual campsites have been established, dispersed back away from the cliffs and the cordoned off areas.  There are a couple of nice privies and there are poles to hang food.  To prevent people from tramping around collecting (or worse yet, cutting down) wood, no fires are allowed.  The cliffs themselves offer amazing views to the west…perfect for catching the sunset.  We quickly got camp setup, cleaned ourselves up a bit, changed clothes, had dinner, blah, blah, blah, and took our cups of tea out on the cliffs to catch the show.  We were joined by four day hikers but there was plenty of room for all.  The sunset didn’t turn out to be as spectacular as the one we had from Raven Rocks on our north-bound hike to Harpers Ferry, but it was beautiful all the same. 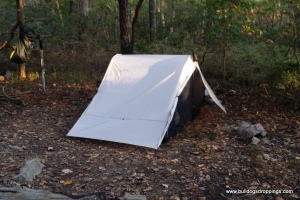