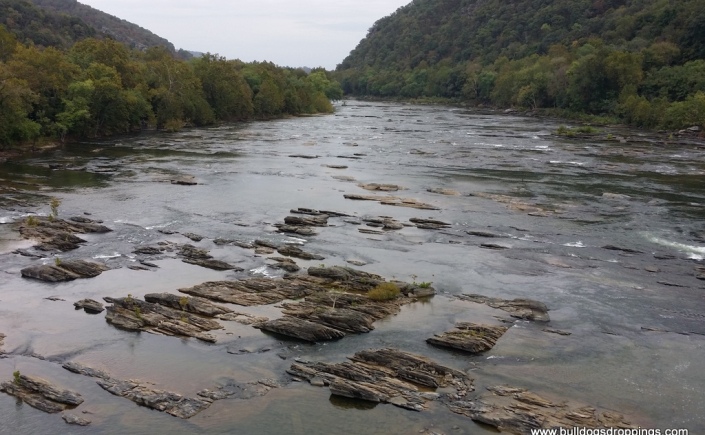 Loonie and I recently completed our AT section hike covering West Virginia and Maryland.  We had planned to do the approx 20 miles of WV over three days in one week, spending the rest of that week sightseeing.  The 42-mile Maryland section would be done the following week.  As it turned out, it was far too warm the first week, getting up over 90 deg one day and mid-80’s the rest, so we tackled it all over the second.  We took our time, doing some very low miles to take in as many of the sites that these sections have to offer.  Points of historical interest were really the highlights of the trip.  Many hikers blaze through this part of the trail but I can’t stress enough that if you’re into history, especially Civil War history, slow down and take some time to see as much as you can.  You won’t be disappointed!

Doing everything in the second week proved to be a wise choice.  We had very mild temps and no rain of consequence any day while hiking.  In fact, we never put the rain gear on other than a time or two for some additional warmth or wind protection.  We did have two good downpours the first two nights in Maryland, but we were already tucked safely away in shelters, sparing us of having to carry a wet, heavy tent.  With respect to grade, it doesn’t get much easier than these two states, at least compared to what I’ve experienced thus far on the southern half of the AT.  But we did encounter more rock than expected.  The small, cobble-like rock that’s hard on the feet!  There were some stretches in Maryland that were smooth and wide, almost like walking in a park.  Otherwise, you can expect to be watching your step quite a bit to prevent a fall or twisted/broken ankle.

Following is a rundown of the northbound West Virginia section (pics here).  The next couple of posts will cover Maryland.  I’ll skip the day trips to Antietam National Battlefield, Harpers Ferry and Gettysburg, eventually just adding links to the albums for those.

We left the car at the Quality Inn in Harpers Ferry and shuttled down to Bears Den Hostel in VA.  If you’re hiking northbound, starting here insures you’ll cover all of WV since a bit of the trail from here north crosses back and forth between the states.  Operated by the Potomac Appalachian Trail Club (PATC) and located right off the AT, Bears Den looks like it would be a nice place to stay if your hike permits.  We headed north, quickly reaching and crossing VA Route 7 at Snickers Gap.  Cars FLY up and down this two-lane highway, so we waited patiently for a break and then ran for our lives. 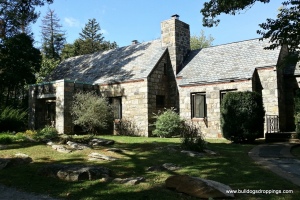 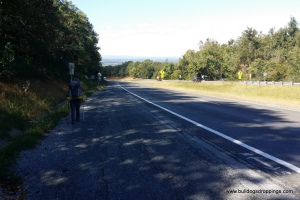 Once across, we made a short descent to a nearly-dry spring and began the half mile rocky climb up to Raven Rocks.  Being a Friday and so nice out, I fully expected there to be a crowd at the rocky outcropping.  We arrived to find just a handful of day hikers who soon moved on.  On the opposite side of the trail, a few steps into the woods, is an unofficial campsite where we planned to setup for the night.  We found one decently flat, rock free spot large enough for the tent.  The remainder of the site was rock infested and uneven.  Several spots would probably be fine for small, one-person shelters.  Otherwise, the ground didn’t look too appealing to pitch.  Regardless, it’s a nice setting directly across the trail from the overlook.

We wrapped up camp chores, had dinner and perched ourselves on the cliff to watch the sunset, which turned out to be beautiful!  As we lay there looking at the stars, six young adults came walking up the trail by headlamp.  CRAP!!!  I knew it was too good to be true.  They asked if there was a sufficiently large enough spot to pitch their tents, one of which was a large four-person wall tent.  I showed them what remained of the rocky site and then informed them that Guthook’s app showed a large area to tent just 0.2 mile ahead.  Two members of the group walked ahead, checked it out, returned and they all hiked on to it.  AWESOME!!!  It turned out to be one of the most beautiful nights we’ve had on the trail to date…and we had that spot all to ourselves! 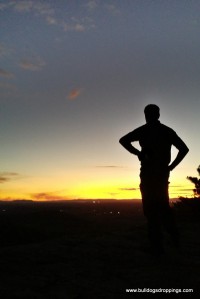 After another look over the valley from Raven Rocks, we continued our northbound walk.  When heading north from Bears Den Hostel, you’ll cover the final four miles of the infamous “Roller Coaster”, a 13.5 mile stretch of continual PUDS (Pointless Ups and Downs).  Fortunately for us, all that remained of the Roller Coaster was a short downhill stretch with a sign located at the bottom informing south-bounders that they’re about to go for a ride!  The four miles we had done didn’t seem all that bad but looking at the elevation profile for the 9.5 miles south of Bears Den leads me to believe that I shouldn’t expect the same treatment.

Heading north from the sign, we began a short ascent that left me wondering why this wasn’t included in the Roller Coaster(?).  Whatever.  The trail leveled off for a bit before making a short descent to Wilsons Gap.  A bit more than two miles more brought us to the Blackburn AT Center, another PATC property.  Here too you can camp or stay in a small bunk house.  There’s a solar shower, chairs, tables, etc.  A very nice setup.  It’s a steep 0.2-mile hike down to the Center but they have a water spigot that we were not going to pass up.  The entire section we would be covering over the week had not seen rain in quite some time and many of the water sources were dry.  Additionally, the water source for David Lesser Memorial Shelter, our destination for the night, is supposedly 0.5 mile down a steep hill from the shelter.  I couldn’t be sure if it was even flowing and I certainly didn’t want to make the hike down to find out.  We opted to tank up on enough water here to get us through to Harpers Ferry the next day. 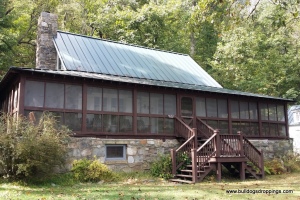 After having some lunch and filling up on water, we made the climb back to the trail and continued on.  It was easy walking from this point to David Lesser Memorial Shelter.  This is a nice, large shelter with a big porch and bench in front.  There’s a covered pavilion with a picnic table and swing and there looked to be quite a few spots downhill from the shelter to pitch tents.  We elected to stay in the shelter in order to make an earlier start in the morning for our hike into Harpers Ferry.  Also staying that night were two young female flip-flop thru hikers, Paper Cut and Sonic the Hedgehog.  They had started at Harpers Ferry months before and hiked northbound to Katahdin in Maine.  They then flew down to Georgia and started hiking northbound.  This was their last night on the trail.  We had not had the experience of staying with anyone about to finish a thru hike, so it was a cool experience getting to hear their stories and seeing their excitement for finally achieving their goal.

With no tent to pack up, we were able to get an early start (well, early for us).  Loonie was excited for the shower that awaited her.  I was excited for the town food that awaited me.  It was nearly all downhill from this point to Harpers Ferry and the tread was pretty smooth the entire way.  A quick three miles brought us to WV Route 9 at Keys Gap where we were greeted with the signs “Welcome to Virginia” on our right and “Welcome to West Virginia” on our left.  This is a scary crossing with cars zipping along in both directions, with a blind hill on one side to add to the fun. 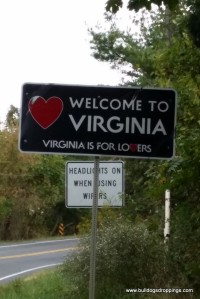 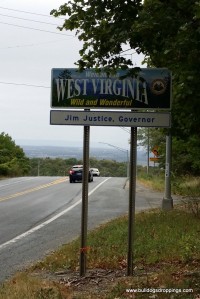 We quickly made our way across and resumed our journey, crossing some bog boards and passing the “4-Mile Campsite”.  Next up was the final VA/WV state line sign, shortly after which we entered the Harpers Ferry National Historical Park grounds near Loudoun Heights.  It was near here that Stonewall Jackson positioned some of his Confederate artillery to pound the Union troops stationed in Harpers Ferry into submission.  More than 12,000 Union troops surrendered to Jackson, the largest single surrender throughout the Civil War. 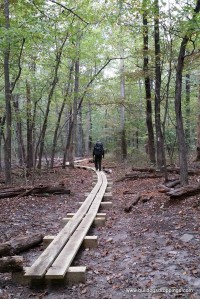 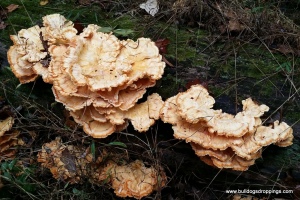 One and a half miles more brought us to US 340 and the bridge over the Shenandoah River.  Fortunately, a crossing of the highway is not required here.  A convenient path under the bridge and up some steps takes you safely to the other side.  There’s a fantastic view of the Shenandoah and surrounding mountains from the bridge.  We snapped some pics and made our way across.  Once across, the AT heads on to lower town Harpers Ferry.  We turned off and made the short walk up to the Quality Inn where we stayed for the night.  With showers and laundry out of the way, we ordered a half calzone and sandwich for delivery from Anthony’s Pizza.  The calzone was AMAZING, and the half order would have been sufficient for the two of us.  Bellies full, we hit the sack to get some rest before our shuttle north in the morning.

US 340 bridge over Shenandoah River 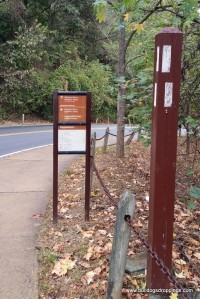