Here’s a rundown of each day of the hike from Damascus to VA 42……all in one LONG post!  You can find the complete photo album from the trip here.  I’ll cover mine and Loonie’s trip in the Shenandoah’s in the next post.

Shuttled from Bear Garden Hiker Hostel on VA 42 down to Damascus and spent the night at The Broken Fiddle Hostel.  After breakfast at the Damascus Diner the next morning, we headed out of town, briefly following the Virginia Creeper Trail before turning off and heading up into the mountains.

The Broken Fiddle Hostel in Damascus 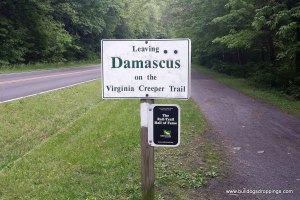 If I wasn’t such a stubborn purist about sticking to the AT, we could have spared ourselves of a couple of stiff climbs and just walked the wide, easy Creeper Trail all the way to Luther Hassinger Memorial Bridge, a distance of nearly 14 miles.  At that point, the AT leaves the Creeper Trail for good.  Sticking to the AT, we gained and lost quite a bit of elevation as the trail wound up into the mountains only to drop back down to the Creeper…twice!  The day was cool and dry though so all was well.

There’s a large, flat spot to pitch next to the river just after crossing the bridge and that’s just what we did.  We shared the site with thru hikers Tree Trunk (Australia), McDouble and Pace Car (married couple from Nashville) and a couple of others that showed up later. 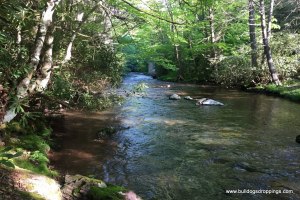 Our original plan was to try to make it to Thomas Knob Shelter up in Mt Rogers High Country, putting a good chunk of the trip’s climbing behind us.  With all of our AT purist exertions the day before and the tough climb this day up to Buzzard Rock (AWESOME by the way) and Whitetop Mtn Rd, we chose to end the day at Elk Garden.

McDouble and Pace Car headed up to Buzzard Rock

We found out the next morning that McDouble and Pace Car had passed us at some point and, despite the bear warnings, pitched just up the hill after crossing the road from the Elk Garden parking lot…where we stayed.  I was kicking myself now for not moving on at least past the road.  They had a really sweet spot all to themselves. 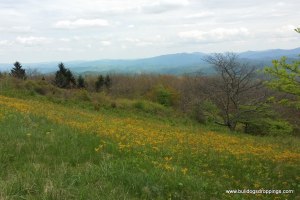 Made our way into Lewis Fork Wilderness and on up to Thomas Knob Shelter, skipping the side trail to the tree covered summit of Mt Rogers.  A few of the infamous Highlands ponies made an appearance, which was cool. 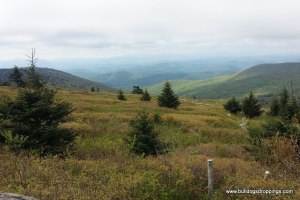 Hiked on, crossing the 500 mile mark (from Springer Mtn, GA), and entered Grayson Highlands State Park.  The entire walk through the Highlands is spectacular!  Hard on the feet at times since its quite rocky but so worth it.  It’s an amazing place and we were just blown away.  Definitely ranks up there with Roan Highlands.  There are a lot of interconnecting trails in this area and you have to keep an eye out to make sure you don’t miss a turn.  We did at one point and walked for nearly a half mile before I asked Deep Woods if he had seen a white blaze recently.  Guthook’s app got us back on track though.  Ironically, on our way back we crossed paths with a thru hiker headed in the wrong direction as well. 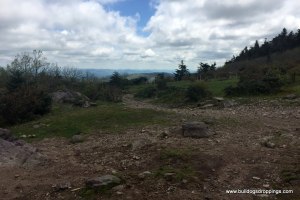 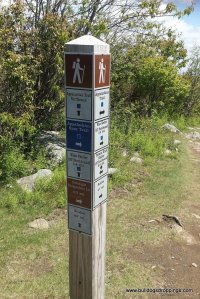 Back on the AT, we ran across more ponies before making the descent to The Scales, where we stopped for a short break.  Moving on, we came to a pasture near the Pine Mtn Trail.  Here we found a small, flat-topped hill with room to pitch our tents.  It also had the benefit of a nice view of the countryside as well as some longhorns grazing below.  Another great day weather-wise, though we were nearly blown off the hill that night.

A few more ponies showed up as we were breaking camp.  We were treated to some amazing trail magic at Fox Creek put on by 2017 thru hikers Rabbit and Duck Fart and Rabbit’s wife Autumn.  They graciously fixed us massive omelettes with all the fixin’s.  They had pretty much anything a hungry, thirsty hiker could want.  After stuffing ourselves we moved on. 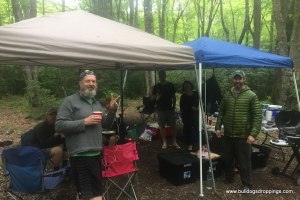 A light rain began to fall but it was brief and not enough to bother with the rain gear.  Met thru hikers No Heart (Florida) and Nightingale (New York), both retired.  They had met on Springer and had been hiking together since.  Talked with them while we hiked on.  Ran across a couple of ladies section hiking southbound and they said they were able to cross the bridge at Comers Creek Falls.  Apparently it was determined that the bridge was failing, no longer safe to cross, and the ATC was encouraging a long road walk as a detour.  After listening to the ladies and consulting comments on Guthooks from other hikers who had safely crossed, we all chose to do the same.  Fortunately, none of us perished!  DO SO AT YOUR OWN RISK!!! 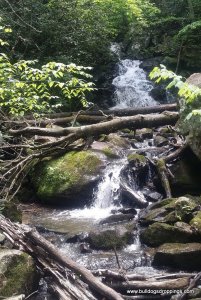 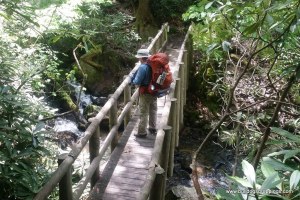 Took a break at Dickey Gap with No Heart, Nightingale and Gazelle, another thru hiker that blew by us earlier.  Made it to Trimpi Shelter where we pitched our tents, changed clothes and hung out talking to Mr Clean from Boston.  Very cool guy.  Rain began to fall.   And then it poured.  And then hail began to fall.  Deep Woods ran up to get the doors battened down on the tents before anything suffered a good soaking.  The clothes I had been hiking in were not so fortunate.  I had hung them out to dry after getting camp setup.  Bummer.  It would continue to rain on and off for a few hours but with the exception of my hiking clothes, everything stayed dry. 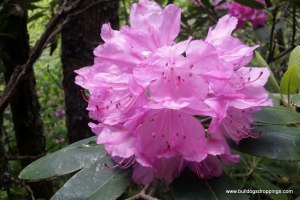 Wrung out my clothes as best I could and hiked on.  Fortunately they dried out rather quickly.  Hiked through a pretty pasture with some cows grazing alongside the trail.  With Trail Days in full swing back in Damascus, we had the trail almost entirely to ourselves.  Over the course of the day, we met zero people backpacking, three day hikers and three volunteer trail maintainers from PATH (Piedmont Appalachian Trail Hikers).  That’s it.  And it was AWESOME!  Volunteers from PATH have done an amazing job keeping up this section of trail.  This was one of the easiest days of the trip and the smooth trail was appreciated.

Stopped to check out Partnership Shelter.  This is one of just a handful of shelters on the entire AT that has a shower.  Unfortunately, it was not working!  Met up with the three trail volunteers again, one of whom gave us some awesome bread, which we promptly devoured.  Made the short walk over to the Mt Rogers National Recreation Area Visitor Center and checked that out.  Downed a couple of cold Cokes and Gatorades and tanked up on water since there wouldn’t be any available for the next several miles.  Hiked on to the first decent looking spot to pitch, made camp…which we were now calling our campsites “Hobo Village”…and enjoyed a small fire before heading off to bed. 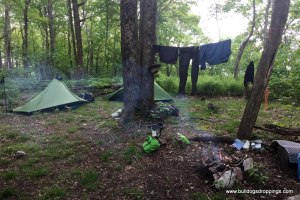 With a bit more climbing knocked out, we began the long descent towards I-81.  On the way, we came to the Settler’s Museum.  A local church routinely stocks the old little schoolhouse with all sorts of stuff hikers want.  Water, Gatorade, soda, fruit, snacks.  We helped ourselves to that, joined by thru hikers Bumble Bee, Tortuga, Pizza Steve and Gumby.  They had all encountered Sovereign earlier on in their hike but thankfully they came away from it ok. 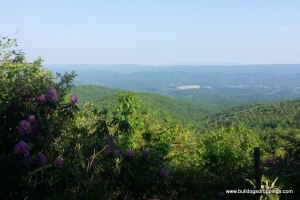 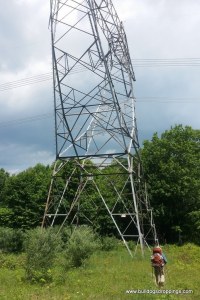 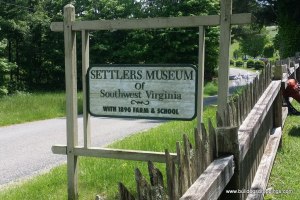 Moving on, we hiked through a meadow, crossed some railroad tracks, passed over a boardwalk and walked through a pasture before dropping out onto US-11.  Just up the road is the restaurant “The Barn”, a trail favorite.  And we were just in time for an early dinner!  We stuffed ourselves there and hiked on. 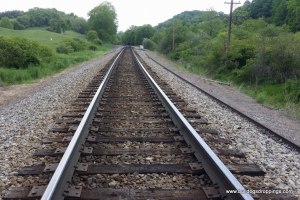 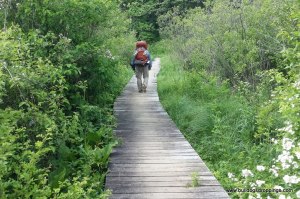 Crossed under I-81, over another boardwalk and pasture, passing the 1/4 way point of the trail before stopping for the night at the Davis Path campsite.  A shelter used to stand here but all that remains are parts of the foundation and the steps.  The picnic table and privy are still usable but there wasn’t much to choose from when it came time to pitch the tents.  We made do and were later joined by section hiker Damn-Fine-O.  Rain began to fall shortly after dinner so we all made an early retreat to our respective shelters. 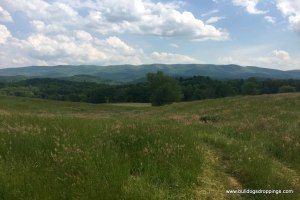 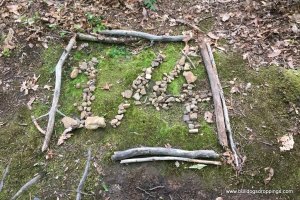 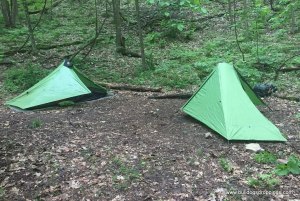 With just a couple of short climbs and 9.8 miles left, we made good time on the way to VA-42.  Four miles into the day’s hike we passed through the area where the horrible events of the previous week took place.  A very sobering experience to say the least.  Moving on, we were treated to more beautiful meadows and pastures which are great but it was really starting to heat up now and those pretty meadow and pasture walks were frying us. 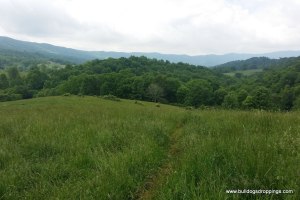 Made it to a small bridge over the Holston River where about a dozen young thru hikers were sprawled out on the ground taking a break and holding a debate as to what constitutes a pastry.  The debate went on for some time and many well conceived, highly intellectual opinions were expressed but there were few minds changed as a result.  Ahhh…to be young again! 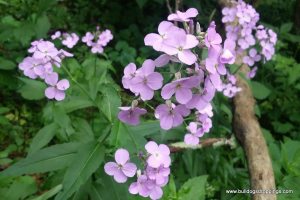 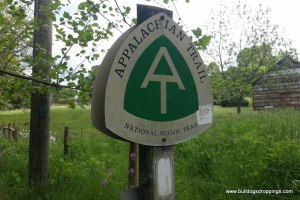 We left the debate, crossed one more large pasture and dropped out onto VA-42.  A short walk up the road brought us back to Bear Garden and Deep Woods car.  Deep Woods hit the shower and then headed off for home.  As for myself, I checked into the little house that Bear Garden has just up the road.  Got myself cleaned up, drank a couple of Cokes, ate two ice cream sandwiches, washed my clothes and hung out until Loonie arrived. 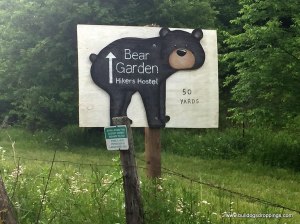