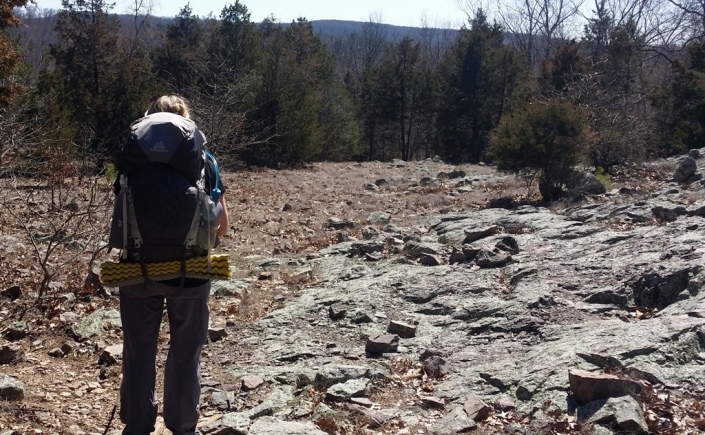 In just a few weeks, mine and Deep Woods’ quest to take the longest amount of time ever to hike the Appalachian Trail continues!  Five years as of last spring to get to Damascus, VA.  I suppose we should slow down, just to make sure we reach the summit of Katahdin on our dying breaths.  Maybe they’ll erect a memorial in honor of us.  In all seriousness, and in our defense, we were slowed down considerably three different years due to a dying family member, forest fires, and wind storms that shut down GSMNP.  Seriously!  We should have reached Damascus three years ago!  Now we’re waiting for the next plague to fall upon us.  Locusts?  Frogs?  All of the water sources turning to blood?  Maybe boils.  Whatever.  We’ll just keep plodding along and get there when we get there.

Progress continues in shedding some pounds and getting in better shape.  So far, I’ve lost 18 lbs.  My original target had been to lose 20, roughly my total pack weight at the start of last year’s AT section hike but I may go for 25.  Any more than that and I’ll start looking pretty emaciated!  We’ll be starting this year’s section hike in mid-May now (don’t ask!), so there’s more than enough time to hit that.

Loonie and I were able to get out and do an overnight hike up to Bell Mtn in MO…just off the Ozark Trail.  This was her first time there (featured pic) and we had very nice weather for the short time we were out.  Such a beautiful place.  One surprise: a couple of feral goats made an appearance just as we were setting up camp at the top.  They weren’t there when I hiked through two years ago.  I suppose they strayed off a local’s property and have now taken up residence on the mountain, cleaning up after careless hikers.  Neat to see them but, considering it is designated wilderness and they’ll eat pretty much anything, I can understand why some believe they should be removed.

As usual, our intent had been to do a couple more 2-3 night trips in March and April but our schedules haven’t allowed for it.  Really sucks considering how little we were able to do last year.  Is what it is and we (well, I) just need to be grateful for what we have been able to do.  It won’t be long and it will be blazing hot and buggy here.  Not the best conditions for backpacking, that’s for certain.  Seems this is how things play out each year.  I’ll have this idea in my head that we’ll knock out some miles on the OT early in the year and then other stuff comes up and the trail has to wait.  We’ve been blessed with five grandchildren in the span of as many years, with yet another due at any time, so the trail has taken a backseat.  And rightfully so!  One of these days, we’ll start bringing them along.

In the meantime, work has begun on a new pack.  This one will replace the small frameless DCF (Cuben Fiber) pack I’ve been using for solo trips.  As of now, we’ve only made a mock-up out of heavy craft paper to determine if I’m of the right track and get some idea of the construction sequence.  Next step will be to make one out of cheap ripstop.  Once complete, I’ll load it up and take it for a spin.  I should have a good idea if the torso length and volume issues my original pack suffer from have been addressed.  If all goes well, we’ll make any necessary adjustments and get to work on the final product.  Once again, frameless but this time a mix of 1.43 oz DCF and 2.92 oz DCF.  The 2.92 oz should give me a bit more abrasion resistance on the bottom panel and hip belt.  Hopefully, I’ll be able to post complete details on materials used as well as images and comments on the complete construction process.  Obviously, I’m not the most brilliant individual so fingers crossed that I wind up with something that serves me well!  I’m trying to concentrate on getting in better shape so the pack probably won’t be ready for the upcoming AT hike. No biggie. I’m not gonna stress over it.