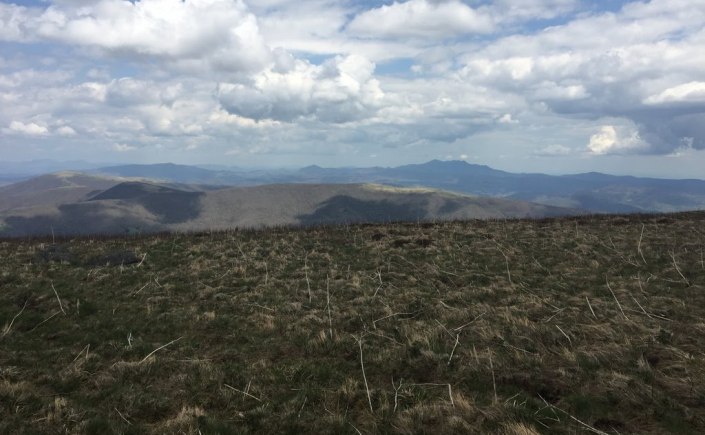 It’s taken me forever (like 6 weeks or so) to get around to the postscript of this Spring’s trip.  Crazy!  I finally made it through the pics of the AT section hike and have updated the link on the Appalachian Trail page under “Old Droppings” accordingly.  That will get you to the Google Photos album.  It’s a mix of both mine and Deep Woods’ photos and many of mine just plain suck!  I also need to finish going through the pics from the rest of the trip.  I’ll eventually make my way through those.  And at some point I’ll try to update the wildflowers page, adding any new ones we ran across, as well as adding captions with the identity of each, something I’ve been meaning to do for a LONG time now.

The girls and I spent one day at Trail Days checking out all of the gear on display before moving on.  Truth be told, we were more interested in having a look at Grayson Highlands.  I did run across a number of folks Deep Woods and I had hiked with over the course of the previous 10 days, including Maine Mike, Liam, Boston Pops, Turtle and Cheesecake.  It was great talking with them again and it gave me an opportunity to wish them best of luck on their journeys.  It would be interesting to know how they are faring now.  Just fine I would imagine. 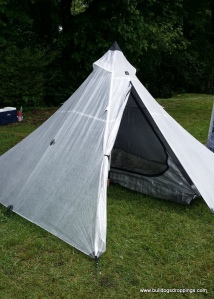 Grayson Highlands didn’t disappoint.  First stop was the visitor center.  Four of the ponies the park is known for were roaming around just outside.  After checking those out and grabbing some lunch, we hiked up the Rhododendron Trail and on to the junction with the AT.  More ponies, including a couple of foals, were roaming around this area as well.  As we made our way back to the van, we ran across four young thru hikers who had moved on past Damascus but were now looking for a ride back to town.  We told them that the van was packed to the gills but to follow us back to the parking lot and we would see what we could do.  Eventually, we were able to accommodate them, cramming the four in the back, and dropped them off at Tent City. 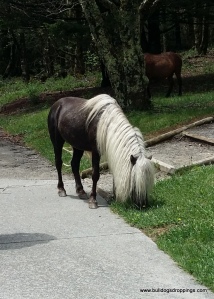 At that point, we started back for home, camping one night at Fall Creek Falls State Park, TN.  Checked out it’s namesake waterfall and some other natural features before calling it a wraps to the trip. 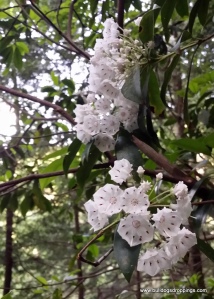 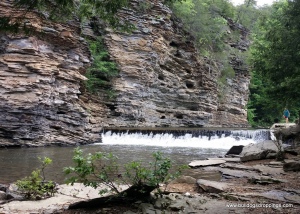 As I mentioned in another post, this was our favorite section of the AT thus far, especially Roan Highlands.  Considering we’ve been so fortunate to see nearly the entire trail from Springer Mountain, GA to Damascus, VA in nice weather, that should tell you something.  This section, Erwin, TN to Damascus, offers such a variety of things to see – the magnificent balds and views of the Highlands, waterfalls, a beautiful river, walks through pastures and more.  It’s fantastic!

Having said that, there’s no question I need to resign myself to the fact that I’m not getting any younger and try to be more physically prepared next time around.  Section hiking the AT has it’s own set of unique challenges, one of which is that each time you get back to the trail you’re starting all over again as you struggle to get your legs.  On top of that, the above average heat this year was particularly hard on me.  I’m not one of those who likes to crunch miles but not having to crawl up every hill does make for a more enjoyable experience!

Total AT miles now stands at approximately 515.  That’s all of the trail from the southern terminus on Springer Mountain, GA to Damascus, VA and the 44+ mile stretch in the Shenandoah’s Loonie and I did back in October.  Plans are coming together for mine and Loonie’s trip back to the Shenandoahs this fall.  We hope to finish all of the park on this trip.  The “plan” (at least as of now) is to start at Rockfish Gap (I-64) and get off the trail at Simmons Gap where we finished last year.  We’ll then take a few days off to do some other stuff before returning to the trail and doing the section from Thornton Gap to Front Royal, VA.  That’ll put me just shy of 600 miles…a bit more than 1/4 of the way to the summit of Mt Katahdin in Maine, the northern terminus.  Next year Deep Woods and I will continue to close the gap from Damascus to Rockfish Gap while Loonie and I might just continue north from Front Royal.  As for other trips coming up, Loonie and I will try to do another section of the Ozark Trail in Missouri but unless we get a stretch of several days of cooler weather in the summer, that will probably have to wait until the fall as well.