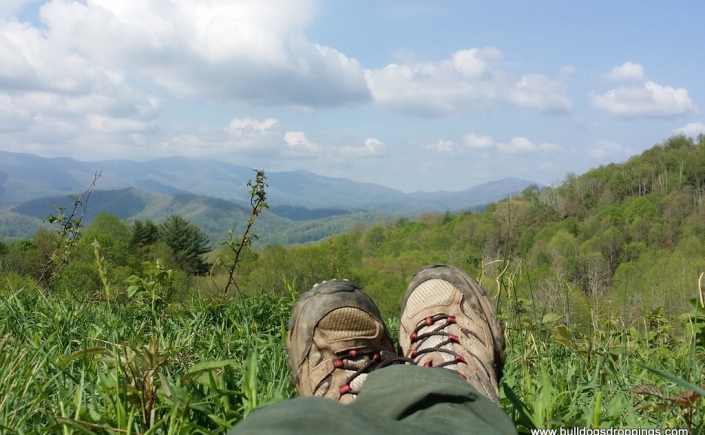 After over-indulging ourselves (well, okay, I was the only one to over-indulge) in the AYCE (All You Can Eat) breakfast at Mountain Harbour, we resumed our walk north.  Mountain Harbour is an awesome place to stay and I highly recommend it to anyone passing through.  The owner personally checked in with each of us to see how our hike was going and how we enjoyed our stay.  Nice!

Having taken on supplies at the hostel for the remainder of the trip, our packs were heavy as we made the 2.5 mile climb to a ridge above the highway.  We crossed some small streams early on, made our way up through a clearing, passing some Foam Flower and Yellow Buttercups along the way and knocked out the final push to the top of the ridge at 3,700 feet, where I promptly planted my butt to rest and take in the views. 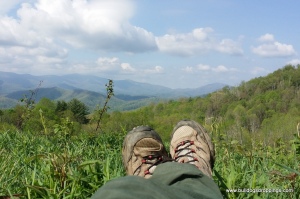 My case of dead leg syndrome seemed to be lifting but now the temperature and humidity were on the rise.  These took their toll on me later on in the trip but for now I was faring pretty well.  Deep Woods was doing just fine as always.  Ughhh!!!

After some coaxing from Deep Woods, I got back on my feet and resumed walking.  The trail now dropped approximately 1,000 ft over the course of the next four miles to the beautiful Elk River.  En route, we checked out the Isaacs Cemetery and Jones Falls, the first of four waterfalls we would visit over the course of the next two days.  On reaching the river, Deep Woods immediately dropped his pack and waded on in,  followed shortly afterwards by myself.  It was such a pretty spot that we stayed for some time.  At each impressive spot we came across over the course of the trip, Deep Woods would pronounce that it was there that he would build his summer or winter home.  Along the banks of the Elk River would be summer home number 36. 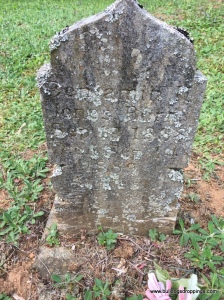 We eventually returned to the bank and continued the trek, following the river for a bit before turning back into the forest.  Approximately two miles up the trail, we came to Mountaineer Falls.  Not being nearly as impressive, though, as Jones Falls, we continued on after a short stop.  It was at the falls, however, that we first ran into Liam, a thru hiker from Australia.  We would leap frog back and forth with Liam and his buddies Boston Pops (Boston), Turtle (North Carolina) and Cheesecake (Germany) over the next few days, sharing a campsite one evening.  Very cool guys and we enjoyed talking with them and hearing their stories. 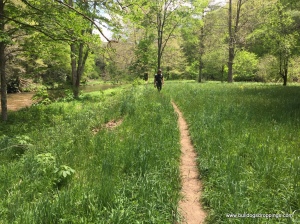 We passed by Mountaineer Falls Shelter and camped with Liam and the gang at Slide Hollow, 0.8 mi further up the trail.  Stayed up for a bit, talking with the guys around the campfire and then called it a day.

Cheesecake hit the trail just ahead of us the next morning.  The rest of the gang followed but overtook us later in the day.  They flew on up the trail and we wouldn’t see them again until two days later.  The leap frogging would continue then but for now we plodded along, intent on tacking on a mile or two by days end to position ourselves a bit closer to Boots Off Hostel.

This was about the only uneventful day of the trip.  The temp and humidity were climbing as was the trail on our slow walk up to Moreland Gap Shelter.  We stopped for a bit and enjoyed the view to the West from a log bench that had been erected right next to the trail and then moved on.  Came to a small waterfall shortly after passing Upper Laurel Fork and continued on. 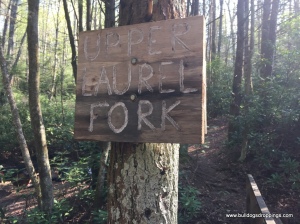 Spotted another Pink Lady Slipper (there would many more…more than I had ever seen…before we reached Damascus) and a couple of Jack-In-The-Pulpits.  We finally reached Moreland Gap Shelter mid-afternoon and took a long break, seeking some relief from the sun.  Having regained a bit of strength, we continued on another mile or so, arriving at our original target for the day, a nice grassy area with a piped spring.  Intending to move further up the trail before bedding down, we tanked up on water here. 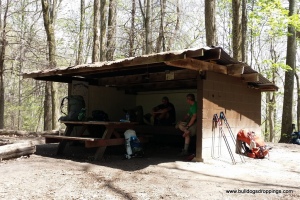 We weren’t quite sure how far we would go but wanted to get one more short climb behind us so we could start tomorrow off with the long descent to Laurel Falls.  As it turned out, that one last climb was all that my legs could muster regardless.  The heat had zapped every last drop of energy from me.  No suitable site to pitch our shelters was seen as we made our way around White Rocks Mountain, so we finally resorted to bushwacking off trail a bit.  Once a reasonably flat patch of ground was located, we made camp, had dinner and immediately withdrew to our respective spaces.  It had been a long day! 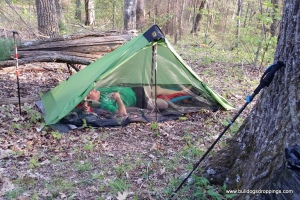 After all of our exertions in the heat the previous day, we got an early start and began the long descent that would eventually bring us to Laurel Fork Gorge and the most impressive waterfall of the trip, Laurel Falls.  We enjoyed some nice views early on and passed our first blooming rhododendron of the trip.  This came as a complete surprise since I didn’t expect any to be in bloom for a few more weeks. 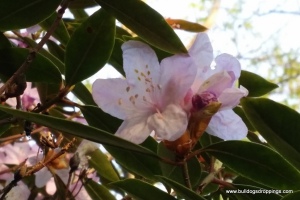 At about the 3 mile mark, we came to a small pasture and old barn.  Checked that out and Deep Woods declared this to be the site of yet another summer home.

Walked on 0.25 mi more, crossed Dennis Cove Road, entered Pond Mountain Wilderness and began a beautiful, easy hike alongside Laurel Fork.  There were huge patches of Dog Hobble through here but the BIG surprise were the rhododendron blooms.  I was blown away!  Loonie and her sister would walk this section a few days later and before doing so described to some locals what we had seen.  They insisted that we must be wrong and that there was no way we would be seeing them flower yet. 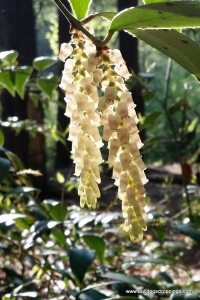 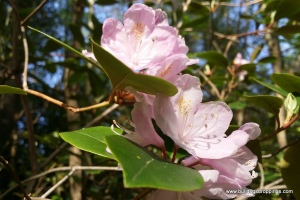 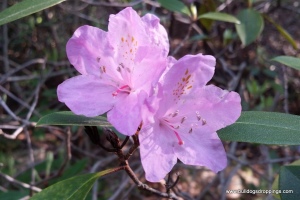 Deep Woods finally pulled me out of the rhododendron and we made our way over a large foot bridge and down into the gorge.  A bypass trail here takes the hiker up and around the gorge during high water conditions but we were able to proceed on, right up against Laurel Fork.  This is a very cool area and we took our time here as well. 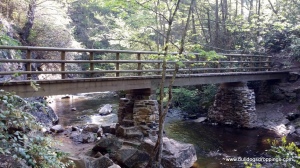 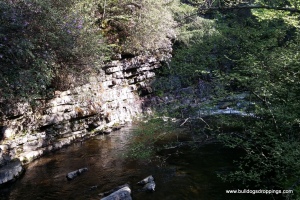 We proceeded on, made one final rocky descent and parked our butts beside the pool at the base of Laurel Falls.  It’s a beautiful waterfall but the looks of the pool beneath are deceiving.  A dangerous undertow exists at the base of the falls and more than one person has lost their life here.  We stayed on shore, taking a long break and talking with a local.  After leaving the waterfall, the trail has been literally carved out of the bluff alongside the river.  One step to the side and you will wind up IN said river. 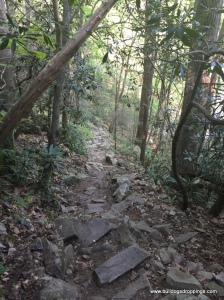 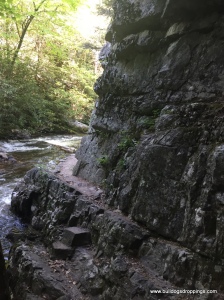 Continuing on, the trail stayed with the river a bit longer, taking us past some Catawba Rhododendron and over two more foot bridges.  What I assume to be a Banded Water Snake was enjoying some sun from a small stand of rhododendron next to one of these.  After tiring of watching us stand there looking him over, he dropped to the ground and retreated to the river. 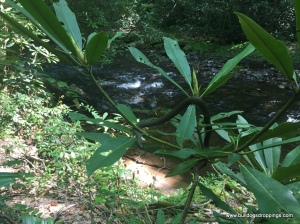 We chose to stick to the trail, shortly reaching a “Y”.  The AT leaves the river at this point and heads up Pond Mountain.  All of the time I farted away early on in the day now came back to bite me in the butt.  The nearly 2,000 feet gain in elevation over the course of the next 1.5 miles, combined with the stifling heat and humidity, meant that I was served a heaping plate of “Tennessee Whup-Ass”!  Deep Woods led us up but I took a number of breaks on the slog to the top, each time dropping to the ground like a sack of potatoes.  I was totally drenched in sweat when we did finally reach the top, where I promptly dropped to the ground once again and thanked the good Lord for getting me there.  Had it not been so hot, I think that this wouldn’t have been such a bad climb, especially now that I was getting some trail legs under me.  Such as it was, though, I had my fill of climbing for one day.  Our reward for making it was our first blooming Flame Azalea and our first glimpse of Watauga Lake on the long descent to Boots Off Hostel.

Once at the bottom, we exited Pond Mountain Wilderness and tumbled out onto Shook Branch Road.  The driveway to Boots Off is just across the road and we made our way there and got checked in.  First order of business: a cold Coke.  Next, we got off calls to our wives, showered and passed off our laundry to the manager who kindly attended to it himself.  Feeling refreshed, we hung out at the fire pit, talking with other hikers while waiting for the staff to generously prepare a meal for all of us.  How cool is that?

Dinner was served and we made our way back to the fire pit to eat.  While doing so, a young staff member decided that it was time to get the fire going.  Out came a shovel which he used to clean out the pit, sending a giant plume of ash into our plates of food.  Several folks got up and walked away.  Being too tired and hungry to move, we stayed put and enjoyed our dinners…ash and all.  Besides, the guy was too energetic and industrious to stop.  After shoveling the pit clean, he dove in, down on his hands and knees in what remained of the ash and built his fire.  Satisfied with his accomplishment, he hopped out of the pit, sat down and enjoyed his own dinner…ash and all.

Loonie and her sister arrived a bit later, staying for this night and the next as a part of their own journey doing day hikes and sight-seeing.  None of us stayed up much later, although a few other guests decided to burn the midnight oil, making all kinds of noise.  Management finally had enough and told them to pack up their crap and hit the road.  Sucks to be them but maybe they’ll chill out at the next place they stay!

I’ll put the wraps on this trip in the next post.