We started our zero day at Big Meadows off with breakfast at the lodge and then headed over to the campground to do laundry.  That accomplished, we hiked up to the summit of Blackrock and then spent the rest of the afternoon stuffing everything we could do without for the rest of the hike into our resupply box which we would leave behind at the office for safe keeping.  Packed up the rest of our gear in preparation for hiking out the next day, grabbed dinner and enjoyed the beautiful evening. 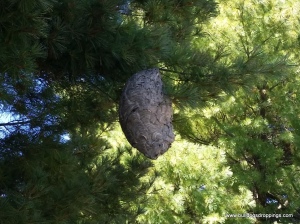 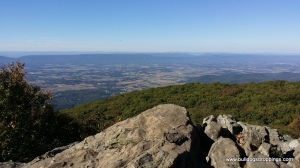 Once again we had a short hike of 4.5 mi to our intended goal for the night, Hazeltop.  And once again the weather was fantastic!  A bit warmer but blue, dry skies yet again.  We encountered a nice view 0.4 mi in but that would be it for the day – we would spend nearly the whole day in the shade of the forest.  Passed the turnoff to Lewis Falls (we did this as a day hike the following week), the cemetery on Tanners Ridge Rd and got to Milam Gap where we stopped for a snack.  We then crossed Skyline Drive for the first time on the trip and moved back into the forest. 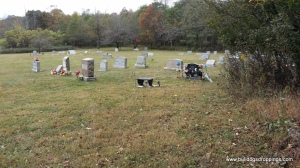 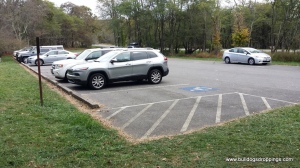 Earlier in the trip another hiker had recommended Hazeltop as a campsite.  We knew that it lacked a nearby water source so we would have to haul in water for the evening and next day but were anticipating a good view.  Arrived to find no such thing.  Plenty of room to pitch the tent but no view.  We still had a few hours of daylight so the new plan was to move on 3.5 mi more to Bearfence Mountain  Hut.  We had reservations at Lewis Mountain Cabins, less than a mile further, for the following night so it would almost be like having another full day off if we could get to Bearfence Mountain this night.  Ate lunch and hiked on.  Passed Bearfence Mtn Rock Scramble Loop Trail (another day hike we would do the following week) and arrived at the hut to find it empty, though four SoBo (Southbound) thru hikers would arrive after dark.  We opted to tent again which worked out well since you know who snores and they got in so late.  At just over 8 mi, it had been Loonie’s longest day to date.  Not too shabby! 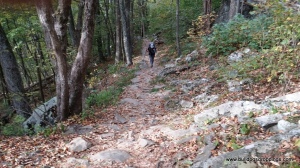 The four thru hikers hadn’t left yet when we got down to the hut in the morning so we had a chance to talk to them for a bit.  They were cool and it is was fun hearing them share some of their stories.  Once they moved on, we packed up and hit the trail ourselves, making short work of the 1 mi trip into Lewis Mountain.  Two of the thru hikers were still there, partaking of the goodies from the store, when we arrived.  Talked with them and sat around for quite a while since the previous night’s occupants of our cabin had overstayed their welcome and hadn’t checked out yet.  Eventually, the manager, and then even Loonie, told them to get lost and they reluctantly moved out.  With those folks out of our hair and the room cleaned, we settled in and hit the showers.  Spent the rest of the day chatting with our neighbors (as well as watching them eat an AWESOME dinner of steak cooked over the grille) and resting our feet while watching the sun set and enjoying a small fire. 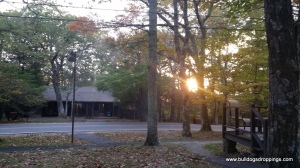 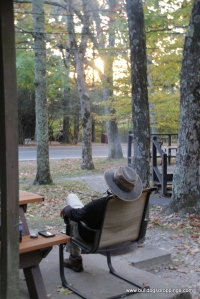 It appeared that day eight would be the last of the clear, blue, dry skies.  Rain was predicted for the two following days with heavy, tropical effect rain from Hurricane Nate coming on the last of those.  We began contemplating how we could shave a day off the trip.  Our original goal for this day was the former South River Shelter site, 5.6 mi away.  The following day would be 6 mi to Hightop Hut and the last day 6.1 mi to the van.  Now we were going to shoot for Swift Run Gap (US 33), 8.2 mi down the trail, and look for a spot to bed down.  That would leave 9.5 mi back to the van but it also included two good climbs…a tall order but we would give it a shot.  Got an early start and moved along at a steady pace.  Reached South River Picnic Area with the expectation of tanking up on water for that night and the following morning only to find the faucets shut off due to low water levels.  Loonie managed to Yogi three liters of bottled water from some tourists though and all was well again.  Had lunch and moved on.  Made the long descent to Swift Run Gap and now it was just of matter of deciding how much farther we wanted to press on.

We had about three hours of daylight remaining.  Hightop Hut was 3.4 mi away but that included our biggest climb since the first day of the trip…almost 1200 ft over the next 2.7 mi.  We decided to give it a shot…and it seemed to take forever!  We were crawling by the time we reached the top.  Took a few pics and knocked out the remaining 0.7 mi, all down, to the hut.  A small group of Boy Scouts was already setup inside.  I thought seriously about pitching the tent but with rain due to move in that night we elected to stay in the hut.  Fortunately, there was plenty of room and the scouts turned out to very respectful.  They were out cold before we were!  Additionally, we now had the advantage of being able to make a quicker break for the van in the morning since there would be no tent to deal with.  11.6 mi and a long climb up from the gap.  Another personal record for Loonie!

It rained lightly on and off throughout the night…nothing crazy fortunately.  Between myself and a couple of the scout leaders, there was some major snoring going on and Loonie didn’t get much sleep.  The scout group hit the trail ahead of us but we weren’t far behind.  They moved north while we continued our journey south.  A light mist continued to fall throughout much of the hike and the humidity was through the roof!  We hardly got wet from the rain while in the cover of the forest but we were drenched none the less.  Rain gear would have been useless and besides, the light mist actually felt good.  It was practically all down for 2.8 mi to Powell Gap, at which point we began an uphill trudge that went on for better than a mile. 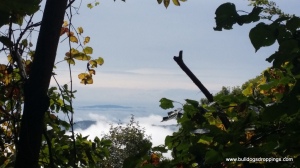 Neither of us was moving particularly fast after the previous day’s exertions but we did finally make it to the top.  We were especially glad now that we had gotten the big climb up from Swift Run Gap done the day before!  From there it was all downhill to Simmons Gap and the van which,  thankfully, remained intact.  Immediately washed ourselves off, put on some clean clothes and drove back up to Big Meadows to pick up our drop box.  Grabbed a bite to eat and then headed to Charlottesville to get a room since we didn’t check into the timeshare in Gordonsville until the following day.

899 miles from the summit of Springer Mountain, Georgia 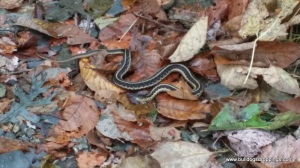 Well, there you have it.  It was an incredible hike and we had a fantastic time!  We’re looking forward to getting back sometime and finishing up the AT through the park.  We have 27.7 mi to do in the north (US 211 – Thornton Gap to US 522 – Front Royal, VA) and 35.9 mi to do in the south (Simmons Gap to US 250 – Rockfish Gap).  Spent the next several days going back to the park to do some day hikes and paid a couple of visits to Montpelier, James and Dolly Madison’s home.  One afternoon to tour the home and one to hike some trails on the property.  We had been to Montpelier years ago when they were still working on the restoration.  That is now complete so we wanted to get another look at it.  AWESOME!  Pretty cool seeing the room where he penned our constitution!  The foundation and volunteers have done an amazing job with the restoration.  I’ll throw another post up soon with some pics of that and the day hikes in SNP.  And as soon as I’ve gotten an album together for this trip I’ll get a link to that up here as well.  Stay tuned.