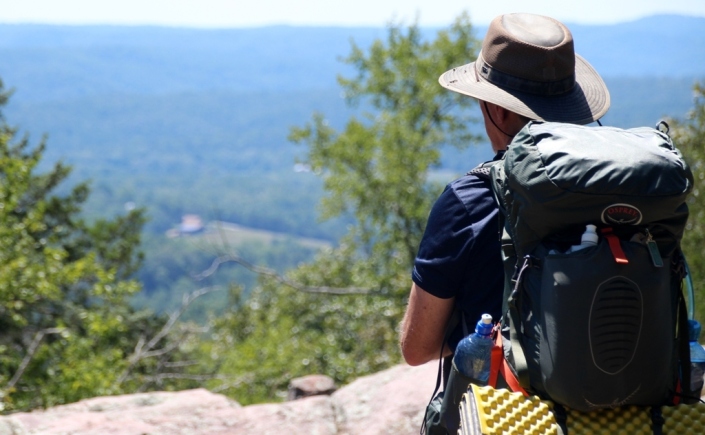 Loonie and I made it out for an overnight trip to Goggins Mountain in Missouri recently.  Just a short 3+ miles up from Johnson Shutins State Park to the pretty glade I was at in May.  The heat wave we had been experiencing here in the Midwest finally broke so it seemed like a good time to get out.  Nice, easy hike … still too warm for my liking but once we made it to the glade there was a gentle breeze that helped.

We setup the tent in a nice spot under some trees just off the glade and kicked back in the shade and relaxed, taking a nap in the late afternoon. 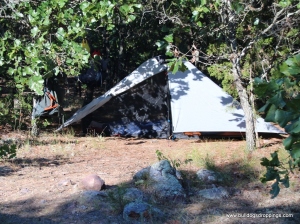 I would have been happy as can be to forego the tent and sleep under the stars but Loonie figured the bugs might be a problem.  She won and there would be no cowboy camping that night.  A younger couple showed up in the early evening.  They had a free-standing tent so they were able to pitch on a rocky clearing just off of the glade.  With our Six Moon Designs Lunar Duo we would have had to anchor to some hefty loose rocks and I wasn’t up to the hassle of that task.  Besides, getting there as early as we did, the shade seemed the wiser choice and we had an awesome little clearing of our own directly outside the tent.  No view of the surrounding country-side but still a great view of the stars later that night.  Had dinner, enjoyed a small fire and hit the sack.  The next day, we made our way back down to the van, headed over to the shutins and parked our butts in the river for an hour or so to cool off.  Then it was back home. 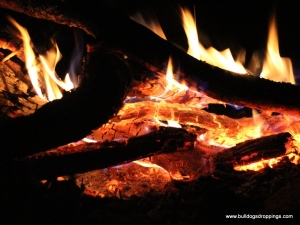 As it turned out, the bugs were Loonie’s worst nightmare!  She wound up with a major case of chigger bites.  Who knows if it was the over-growth on the trail, the shrub she tossed her hiking shirt on to dry out, whatever … she’s got bites over her entire body.  Strangely enough, I only have a few.  I draped my shirt over a different shrub so it could have been that.  Who knows.  Either way, I imagine we’ll be stringing up a clothes line from here on out.

Now then, while she’s nursing her sores I’ve been looking at the calendar and planning some upcoming stuff.  Next month it will be back to Bell Mountain and a bit more of the Ozark Trail before we drive down to Big Cedar for a weekend.  Maybe we’ll swing by Alley Springs on our way down.  We’ll see.

But the BIG trip will be in October.  We’ll kick things off in Shenandoah National Park, doing 40 or so miles on the AT with stops at Skyland, Big Meadows and Lewis Mountain Cabins along the way.  That should be cool!  From there, we’ll head to the timeshare outside Gordonsville, VA for several days.  While there we’ll try to get back to Montpelier (James and Dolly Madison’s home) and Monticello.  Maybe a civil war battlefield or two, a bit of horseback riding…who knows.  Check back in the coming weeks for an update.