First off, our plans were dashed once again by Mother Nature.  After arriving at Standing Bear Farm, completing the section from Allen Gap, we got ourselves cleaned up, resupplied and checked the forecast for the second leg of the trip – the three days in the national park.  There was a good chance of rain all three days but 55+ mph winds were predicted the first day.  Regardless, we were ready to go.  Our shuttle got us as far as Sugarlands Visitor Center in the park where the park service had closed off US 441 (Newfound Gap Road) due to downed trees.  We stopped in at the backcountry office to find out what was up and discuss our options.  They told us that they had already closed the Roaring Fork loop road off as well and were now preparing to close Little River Road, essentially closing off the major vehicle routes to most trailheads on the West side of the park. They were also pulling all of their people out of the backcountry…it was just too dangerous keeping them out there with trees and limbs coming down everywhere.  They urged us to bail.  So, with no way to get up to the Gap other than by foot, our original plan was out and we headed back home.  This is getting to be an extremely frustrating and disappointing pattern!!!

Where does that leave us with respect to the AT?  I now have the section from the southern terminus at Springer Mountain, GA (as well as the Approach Trail starting at Amicalola Falls State Park) up to Uncle Johnny’s Hostel in Erwin, TN –  just over 342 actual trail miles (excludes the 8.8 mile Approach Trail).  Other than the 5 or so mile stretch between Charlie’s Bunion and the Hughes Ridge Trail terminus with the AT in the park, Deep Woods has the same.  He made the call to come back and finish that section at a later date.  Next Spring, we’ll start in Erwin and try to get to Damascus, VA…maybe timing our arrival there with the start of Trail Days.  Fingers crossed.

Now then, despite the recent deluge of rain and all of the devastation that has brought upon areas along southern Missouri’s waterways, I headed off on my own to Bell Mountain Wilderness to do a section of the OT (Ozark Trail).  I still don’t have the galley together for the AT section hike but I’ll jump ahead to the OT hike and come back to the AT hike in just a bit (next few days, weeks…who knows).  No problem with high water on the section of trail I would be covering, other than the East Fork of the Black River down by Johnson’s Shut Ins State Park.  I wanted to see the Scour…path of the torrent of water released when the Ameren UE reservoir dam broke back in 2005.  To get there I would have to cross the Black and if it was running too high and fast then I could always take the bridge across.  Long story short, it looked as though I would finally get a look at this trail before Loonie and I return in the Fall.  So here goes…

I didn’t arrive at the north Bell Mountain Wilderness trailhead until 6:00 PM.  Considering the time, it was a Friday and two cars were already at the lot, I elected to do the west side of the loop and catch the summit…on the east side…on my return.  I got two or three miles in and thought I better bed down before it got dark.  Got water at a nice flowing stream, moved on a bit, found a little clearing and called it a day.  The weather was so nice and the bugs were behaving so I spent all three nights “cowboy style” and didn’t bother with the tarp.  The howl of coyotes in the distance sang me off to sleep.  Pretty cool! 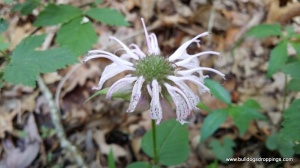 Got an early start…well early for me…of 7:30 AM since I wanted to get all the way to the scour.  Having never done the OT before, I wasn’t sure what to expect as far as trail markings, trail condition, etc other than what little research I had done online and by reading bits of The Ozark Trail Guide Book.  Made it to the junction with the OT where I met a young couple headed up to the summit to camp for the night.  They would be the only two people I saw for the next several hours.  The solitude was nice. 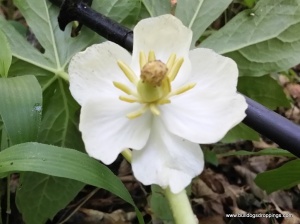 Common Dewberry or Blackberry – not sure which 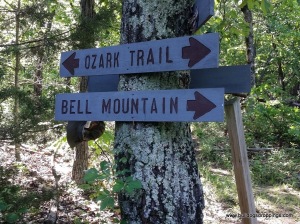 Hung a left onto the OT, heading south.  At times the trail was great…nice tread, clear path…and other times it was as though the forest was taking over.  Tread was still generally good but otherwise you wouldn’t know a trail even existed.  The vegetation was taking over.  Markings were adequate most of the way, though I found myself getting off track several times and having to retrace my steps.  Never so bad that I had to break out the compass but frustrating nonetheless.  For what it’s worth, I didn’t carry a GPS…don’t own one yet…but my phone tracked adequately through Bell Mtn by using the AllTrails app.  I should have downloaded the OT section before leaving and I probably never would’ve had a problem.  Cell service was spotty but on each of the glades, summit of Bell Mtn and at Johnson’s Shut-Ins I had no problem getting calls off to Loonie.  Many sections are extremely rocky, as you would expect in Missouri.  Over the course of the day my feet took a pounding.  The glades on South Bell Mtn and Goggins Mtn were very cool, most offering excellent views.  Loved those.  And considering each day I was out got into the 80’s, the breeze they offered was more than welcome.  When crossing the glades you just need to watch for the sign posts or small cairns to stay on track. 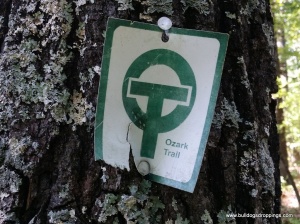 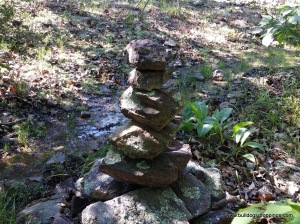 Cairn on the Taum Sauk section of trail 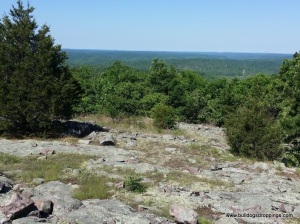 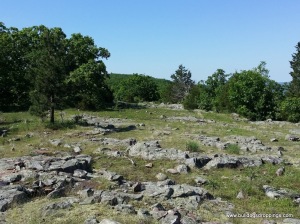 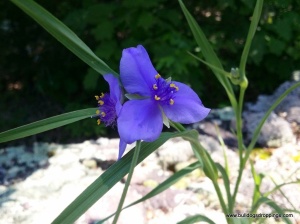 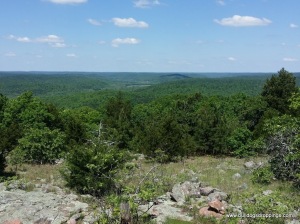 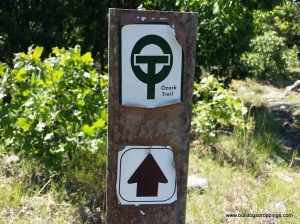 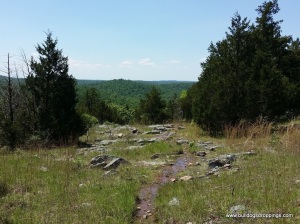 Made it to Padfield Branch where I had lunch and got water.  Checked out the old collapsed house and the nice spring behind it and moved on.  For a third of a mile or so the trail appeared to be an old road…easy going…before turning off and back up and over a knob.  For much of the next mile your on about the same contour after which you climb up to a small glade that has a nice little pool to cool off (probably dry most of the year).  Less than a mile more put me at an awesome glade and the junction with the OT spur trail to Goggins Mtn Trail. 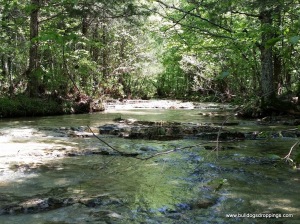 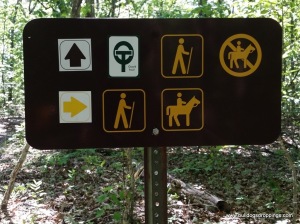 The hike of 3 miles or so down to Johnson’s Shut-Ins Campground on the Goggins Mtn Trail flew by.  I didn’t know what time the store closed and the thought of a cold Coke and ice cream gave me the strength of ten Grinches…plus two!  I got that cold Coke and ice cream sandwich and rested my feet.  Looked around the restored campground for awhile but since it was 6 PM I moved on.  Walked around the day-use area, however, access to the shut ins was closed due to high water so I didn’t get a chance to see that.  I had been there before but wanted to see the restoration.  From here I had intended to hike over to the scour area and then move into the woods to bed down.  The next day would be the 2 mile loop of the scour and then start making my way back to Bell Mtn.  I needed to get across the Black River so it was either do a wet crossing or go over the narrow road bridge.  The river was up but still looked manageable.  My feet felt like they had just gone 12 rounds with Muhammad Ali…no blisters…just plain sore, so I elected to double back a bit, found a spot just outside the campground and called it a day.  This nights treat was a great show put on by the fireflies! 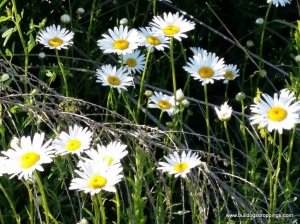 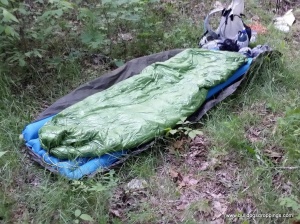 Slept and slept…and then slept some more, not getting out from under my quilt until 10 AM.  And I didn’t actually start hiking until 11.  Crazy!  Once again, I stopped at the store and had another Coke and ice cream sandwich.  Filled up on water and started making my way back up Goggins Mtn.  From here it was a repeat performance of the day before, only a bit warmer.  I had a much easier time following the trail this day so, despite the heat, I made pretty good time back to the Bell Mtn trail junction.  Now it was decision time.  It was 5:30 and I was down to one liter of water.  I didn’t know if I would find any water on the way up to the summit.  The map showed a small pool a half mile or so further on the OT but I couldn’t be sure if that was flowing or not and the next source of water after that was another mile and a half further at Ottery Creek.  Considering all of the rain we had gotten as of late, I decided to take my chances with the small pool down the OT and it turned out to be a good choice.  It was flowing fine and the only water I saw once I got back to the Bell Mtn trail and made my way to the summit was a sketchy looking pool.  I made it to the summit at 7:30 to find it was all mine.  Not a single person there.  In fact, on this day I saw just one other person and he was heading south on the OT so I pretty much had the whole day to myself.  Picked what appeared to be a good overlook and parked my butt there.  Set my stuff up, had dinner, got a call off to Loonie and took some pics.  This spot faced due east so I was looking forward to watching the sunrise.  Sat out on a rock outcropping, looking at the stars, wishing Loonie was there to see it.  The coyotes were howling again as I hit the sack. 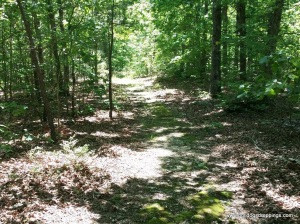 Goggins Mtn Trail on the way back to the OT

Crossing another glade on the OT 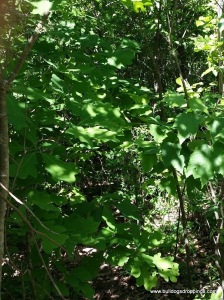 Several sections of the OT were overgrown like this. 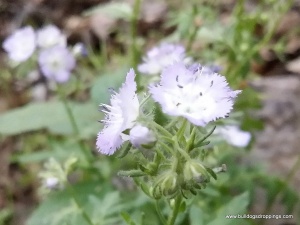 Overslept again (go figure) and missed the sunrise.  I was disappointed about that but it wouldn’t have been the same without Loonie along so I shook it off and got going.  It was only three and half miles or so back to the van and that flew by.  Did see some more Spiderwort, some cacti and a turtle on the way out. 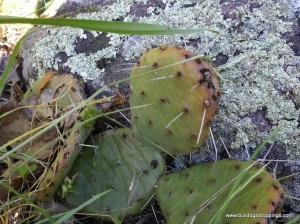 All in all, a great hike.  It was definitely too warm, with temps of 80+ each day, and my feet took a beating on the rocky sections and due to the fact that I tried doing a bit too many miles on days two and three.  Even with the warm temps, the bugs weren’t bad at all.  Loved the glades and the solitude.  There were sections where the vegetation needed to be cut back but I got through with no problems.  Now that I know what to expect, it would be no problem following this section of trail again.  I think I’ll pass on taking Loonie over the entire section I did and just do overnight hikes to the glade on Goggins Mtn and the overlook on Bell Mtn.  She would love those!  And we’ll have to get back and do the loop of the scour.  I’m also looking forward to checking out more of the OT.  Maybe the remainder of the Taum Sauk, the Trace Creek or the Middle Fork section.  We’ll see.  For now I’ll be trying to wrap up the gallery for the AT section Deep Woods and I just finished and pinning down a time when Loonie and I can get out next.