Still WAY behind and trying desperately to catch up before little details fade away.   I need to start using the voice recorder on my phone throughout the day to make note of things, seeing as how I can’t write worth a crap anymore.

I did want to mention that if by some odd chance someone in the vast reaches of the universe just happens to actually be reading this and finds that we have misidentified something or some place….whatever….which I’m sure has already happened and will likely happen way too many times more, PLEASE let us know!!!  We are total newbies to most of this stuff and we would greatly appreciate any corrections you may have.

Alright then, I’ll wrap up the first week of the trip in this one post.  Here she goes….

Took care of laundry, a bit of shopping, cleaning up gear, downloading and backing up pics from the 35mm, etc. Took a LONG nap. I think all of the time in the sun along with all of the physical exertion had taken more out of me than I expected.  Disappointing that we didn’t get back into the park but our time would have been very limited anyway.

Speaking of the 35mm, I’ve only uploaded a couple here but Loonie’s taken several hundred pics over the course of these two weeks and it looks like there’s some REALLY great stuff in there.  Gonna take us a bit to go through everything but needless to say, the ENTIRE “Favorites” section is going to get a complete overhaul.  It’s pretty freakin’ lame right now.  We can’t wait to share these.  Maybe they’ll inspire others to get out and see some of these amazing places and things.

Headed to Metcalf Bottoms in the park, specifically the Little Brier Gap Trail.  Our destination was The Walker Sisters Cabin.  We started the hike from the Little Greenbrier School which meant a round trip walk of just a bit over 2 miles.  This was to be more of an historical tour but maybe we would see some good wildflowers too.  Didn’t hurt that it was really nice out.

Built in 1882, Little Greenbrier School served the Little River Valley and Miegs Mountain community as both school house and Primitive Baptist Church until 1935.  It’s still in use today for interpretive programs, hosting thousands of people every year.

After taking a look at the school we hit the trail for the Walker Sisters Cabin.

Once again, we just puttered along hoping to spot something we hadn’t seen before or just something that really stood out.  Loonie’s got an eye for that.

You can read the story about the Walker sisters here but to sum it up, they were five spinster sisters who lived here and refused to sell their 123-acre farm to the national park.  Faced with a condemnation suit in 1940, the sisters relented and sold their land to the park, provided they were allowed use of the land during the lives of ALL five sisters.  The last sister, Louisa didn’t pass away until 1964!  Talk about stickin’ it to the Man! 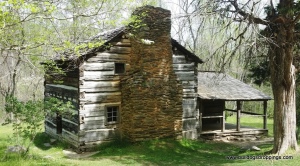 Headed back to the school house, ate lunch and then listened to an interpretive talk about the Walker sisters and life in Little Greenbrier.  Got a tip on where we might spot one wildflower that has been eluding us, Yellow Lady Slipper, and we were off.  We didn’t have to go far, as they were pretty close to Sugarlands Visitor Center.  A short walk led us to one all to itself and then a small cluster nearby.  Beautiful flower!

Headed back to the room and called it a day.

Deep Woods was due to arrive this evening so Loonie could shuttle us to Erwin for the Southbound AT hike first thing in the morning.  Went through the pack and resupply box one last time just to make sure I wasn’t leaving anything behind.  As much as it pained me, we were going to have to go into Gatlinburg to get to the NOC (nothing against the NOC….great place) because I had to get a wide-brimmed hat.  I was not about to set off down the trail again without one, especially considering we were supposed to have a number of sunny days and we would be crossing Big Stamp, Big Bald, Max Patch and a few meadows.  Did a bit of shopping, loaded everything I possibly could in the van so Loonie wouldn’t have to deal with it while I was gone, blah, blah, blah….

In the end, I didn’t get back into the park.  Another day pissed away.  I should be grateful.  Five of the seven had been in the park and were absolutely amazing.  Most importantly, all seven were with Loonie and that’s all that matters.

Tomorrow I would be hittin’ the AT with Deep Woods for 8 days.  In the end it turned out to be just four and quite a different trip than either of us expected but I’ll elaborate on that later.  Deep Woods arrived that night.  We had some pizza and ice cream, checked the forecast and hit the sack.  Big day tomorrow!