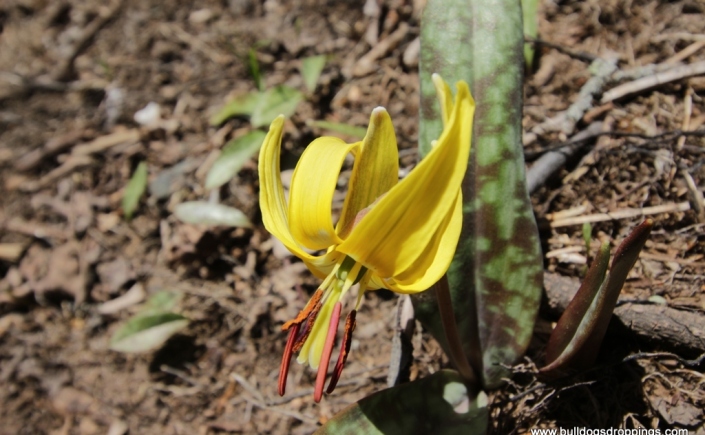 We woke up with a serious case of “van lag”. The long drive and little sleep coupled with a HEAVY pack that’s brand new and I don’t quite have the adjustment down yet and the warm temps….I’m draggin’. Loonie’s not so quick to get out of bed either. But we finally do and have our breakfast of freeze dried eggs, bacon and sausage along with some coffee. Yummy!

We talked with Rick and Haven for a bit before they headed out. They spend at least one weekend a month in the park, preferably in Cades Cove to photograph wildlife. Rick showed us some AMAZING pics of bears he’s gotten.  Check him out on Facebook (Rick Kratz Photography). We hope to catch up with them and Sid sometime again if we can.  Cool people and we could learn a lot about the park from them. 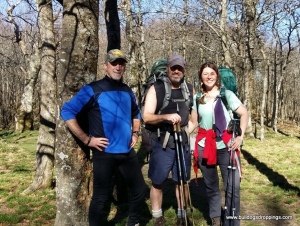 So, it took us like FOREVER to pack up and hit the trail.  Bulldog was not a happy camper. But then again, he was suffering from a major case of “Dead Leg Syndrome” and fighting to get his pack adjusted such that carrying 40 freakin lbs is properly distributed from shoulders to hips.  I’m happy to report that I did indeed get it adjusted properly.  That’s all well and good.  But it does little for you when your legs just don’t want to move you up the trail.

We FINALLY hit the trail at 11:30. Crazy.  And we moved at a snail’s pace.  Fortunately the terrain wasn’t too bad and there were long, wide patches of Spring Beauties lining the trail.  So many that it looked as if it had just snowed.  Interspersed with these were all kinds of little yellow Trout Lilies.  It was beautiful! 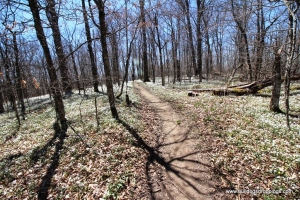 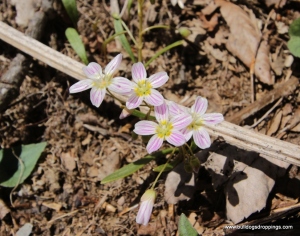 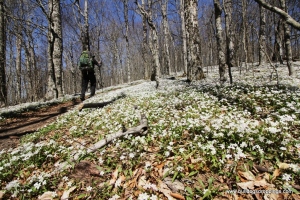 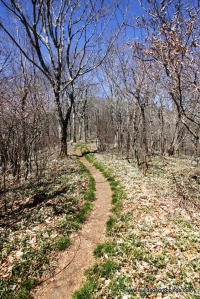 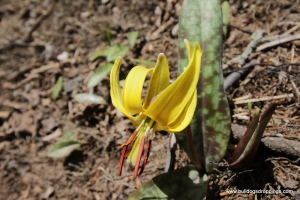 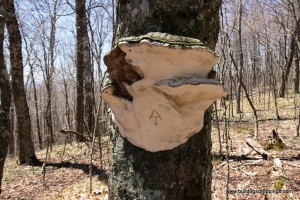 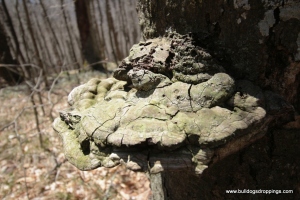 The train of thru-hikers continued this day and we got a kick out of talking to a number of them.  The most interesting one of the day was a biker dude….probably mid 50’s.  We get to talking about gear as hikers so often do and he says “Man, you don’t need much to do this thing.  All you need is a sleeping bag, a tarp, something to cook with and a bag a weed.  With a bag a weed you can get anything else you would ever need”.  He had me all the way up to the part about the bag of weed.  I just won’t go there.  Pretty interesting guy though.

Due to our slow pace and the fact that I didn’t top off our hydration bladders that morning we ran out of water shortly before our stopping point for the day, Derrick Knob Shelter.  Bonehead mistake.  We pressed on, finally arriving at the shelter around 6 PM. 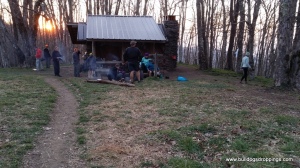 There was a packed house this night and the lawn in front of the shelter was strewn with tents.  I was wishing we were among them rather than being relegated to the shelter as all other non – thru-hikers are.  Stupid park regulations!  Regardless, we settled in for the night and got some much needed rest for the big day tomorrow. 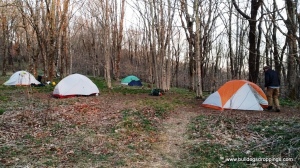 One thing of note: We were talking to a guy who said he was at Derrick Knob Shelter and he was standing outside peeing in the woods when a deer walked up.  According to this guy, the deer slowly crept forward and started smelling his urine.  He says “I’m telling ya man,  those deer up there aren’t normal”.  We had no such encounters.