Santa must have thought Loonie had been nice all year because she added yet another lens to her collection, a Canon 10-18mm f/4.5 IS STM wide-angle.

I know what you must be thinking: “What happened to the Rokinon 14mm wide-angle?”  Well, let’s just say that I got a great deal on the Canon.  Anyway, she was all excited about that and has been snapping away (I’ll post some pics shot with the new lenses soon).  She’s got her work cut out for her though as there’s TONS of older pics to be culled out before we start importing everything into Lightroom.  Since she’s shooting in both jpeg and RAW hard disc space is getting gobbled up at an alarming rate!  I can see this all getting out of hand real quick.

Made reservations for two nights in August 2016 in Yellowstone for the car trip with Mom.  One night each at Canyon Lodge and Lake Yellowstone…both cabin units.  I lucked out big time as each of those were the last of just two or three remaining units.  Then I find out that you need to make dinner reservations WAY in advance.  No luck at the Canyon but I was able to get us in for dinner at the Lake.  Unbelievable!  We’ll be staying the first night just outside of the park in West Yellowstone so that should give us three full days to catch at least some of the high-lites of the park.  From there we’ll head south to the Tetons for a night and then back to Boise for the flight home.  I’ve also made the West Yellowstone and Jackson Hole reservations so all that’s left to do for now is lock in the flight, rental car and hotel reservations in Boise.  Hopefully Loonie and I will be able to return to each park one day and spend some time in the backcountry.

Deep Woods and I will  be heading to REI next week to look at packs.  I’ll be sticking with my cuben fiber pack for the AT trip but want to check out the Osprey Atmos 65 AG to see if it will work as the heavy hauler for when Loonie and I go together.  Deep Woods is wanting to get a look at the same pack. 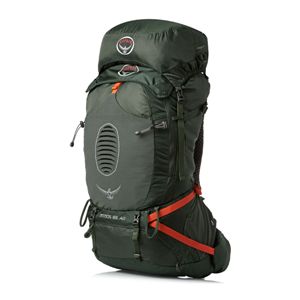 The Atmos was a top pick by both Backpacker and OutdoorGearLabs and it’s supposed to carry really well up to 40+ lbs.  That’s just what I’m looking for as I’ll be trying to carrying everything possible and limiting Loonie to carrying just her camera, clothes and essentials.  The big question is what kind of room there’ll be after sticking a BearVault BV500 in the thing.

The bear resistant canister is a requirement in Yosemite and that’s where we’re shooting for in 2017.  Hopefully I’ll be able to carry the thing internally and still have room for everything else.  We’ll see.

Finally, we got around to watching “A Walk in the Woods“, the Robert Redford film based on the best selling book by Bill Bryson.

While the movie was entertaining (though not nearly as much as the book) and it was cool to see some places Deep Woods and I have been the last couple of years, there were some major faux pas that anyone who has hiked the trail will immediately pick up on.  To name just a few:

All in all, it was an ok film, especially for the casual viewer.  Hopefully it will raise awareness of the need to protect and improve the trail for future generations.